FROM THE MAGAZINE: How effective leaders include safety in planning

When it comes to any project, good planning creates good outcomes. Okos Partners’ senior partner Peter Krammer, and Bart Gragg, president of Blue Collar University, discuss how leadership in the planning phases can result in safer and more efficient solutions. 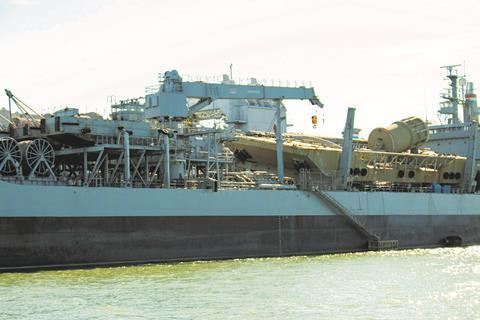 While working on leadership development with the US Department of Transportation’s Maritime Division (MARAD) at its Suisun Bay Reserve Fleet, we were asked to help plan the movement of a mothballed ship to another location in the anchorage.

The SS Peterson, a specialised fuel oil tanker, was at anchor in Suisun Bay on the Sacramento River Delta.

It was held in position against shifting tides by three anchors with 13 lines tying it alongside a cargo ship. It had no onboard power, so it had to be towed to the new location.

Some of the major hurdles we had to overcome were:

• Not cutting a major buried high-voltage power cable crossing the riverbed. One of the two bow anchors was lying within 40 ft (12.2 m) of the cable. If the ship shifted and dragged that anchor across the cable, the costs and consequences would have been unthinkable

• Releasing the stern anchor under strain against the outgoing tide; it would be a difficult and hazardous manoeuvre to lift that anchor off the bay bottom with no help from ship power.

When it comes to any project, especially one as complicated as this, good planning creates good outcomes, including safety, efficiency, quality, happy customers and people going home uninjured. MARAD needed a good plan.

Before we started the planning process, it became apparent that not everyone was on board. Conversations with one supervisor showed the attitude that “we have moved 80 ships out of here – what is different about his one?” Few people held onto that attitude once the conversations got going.

We brought the supervisors together for one meeting to get an overview of the department leaders’ thoughts, questions and needs for the ship movement. Then we had an all-hands meeting that included mechanics, deckhands, crane and barge operators, electricians, environmental technicians and representatives from the ship’s live-aboard crew.

We had a range of talent, from decades of experience to just a few weeks on the job. In all, there were nearly 40 people in the room. We gave a detailed outline of the objectives – what we needed to accomplish on this project – and asked for input and questions to promote thought and conversations. We had to know the issues and obstacles and needed to fill in the details of the entire picture, not just the big picture. This included the validity of the objectives, how we would meet them, the work required to get the job done and the resources needed every step of the way.

What we wanted most was for people to speak up and share their ideas and fears. This was not an easy task in a culture unused to sharing. We got pushback. We encountered resistance not because people thought knowledge was power and they did not want to give that away; they did not want to share knowledge because they did not think anyone would listen to them. Leadership used pushback as feedback.

But people stepped up. Often a working supervisor raised a question, and another had the answer. Leadership encouraged the least experienced to tell their thoughts and concerns. Their input turned out to be critical to the success of the operation. The planning session spawned other conversations, which raised even more questions. When those questions got answered and there was confidence that the answer was the best one, it was documented on a working plan accessible to everyone.

Safety was just a part of it, but it was a big part. If an operation could not be done safely it was not going to be done.

One big example was staffing the team that would loosen and retrieve the lines holding the two ships together. A lead deckhand asked: “Who are the line handlers?” As names were called out, a mix of personnel from electricians to environmental techs raised their hands. When asked which of them had ever handled a line, some of them had, some of them had not. Here is where it got interesting – that deck lead said: “All of you are with me after lunch today. We are going to have line handling training.” And they did. And there were no incidents.

The planning session uncovered many issues and questions. Another example was retrieving the anchor that could drag across the high-voltage cable. A barge-mounted crane was needed to do the retrieval. The operators brought up an issue: operating a crane on a barge is very different than operating a crane on dry, stable land with outriggers and crane mats.

Critical to safety and effectiveness is not just learning from what goes wrong – it is taking a look at what goes right and what happens seemingly without incident.

There is more than just the maximum lifting capacity of the crane – you have to consider the tilting of the barge. Too far and the crane ends up upside down stuck in bay mud and the Coast Guard fishes the crew out of the water somewhere downriver.

We asked what the maximum tilt angle would be for them to call off the operation; there were lots of ‘we think’ opinions but nothing definitive. They had to know. So, they researched the questions and came back with the answers. Those were incorporated into the plan.

On each issue, the team worked out who would get the right information and who had to agree on how a specific operation like lifting the anchors would happen. Then we documented each of those decisions on the plan.

The ship movement went off without any major issues. The team followed the plan and updated it as issues arose. The major tasks had a Plan B. Each task had the right resources needed to carry it off; each team member was clear on his or her duty; and supervisors knew the whole picture so they could make good decisions in the moment.

In business, and on the jobsite, discipline only happens when each member of the team engages in the process.

Critical to safety and effectiveness is not just learning from what goes wrong – it is taking a look at what goes right and what happens seemingly without incident.

Usually, when an operation was successful no one reported anything. The leadership team did two things to make the next move even more successful: firstly, they did not accept that everything went well, and secondly they made it safe for people to speak up and tell the truth.

It turned out there were some issues the team dealt with on the fly during the operation that could have been dealt with beforehand. Fortunately, the teams were smart enough to know how to handle these situations and knew that someone had their backs if they did not think the job could get done safely.

The planning was not the end of the story, but it played an essential role in the operation. Planning brought discipline to the teams and, in doing so, minimised their guesswork

In business, and on the jobsite, discipline only happens when each member of the team engages in the process. When your team takes part in writing the plan, they align and engage with the plan. When this happens, they tend to get home safe and uninjured that night.

To do anything, whether it is handling a line, operating a crane or moving a ship, you need the discipline of planning. Without planning, you are just winging it.