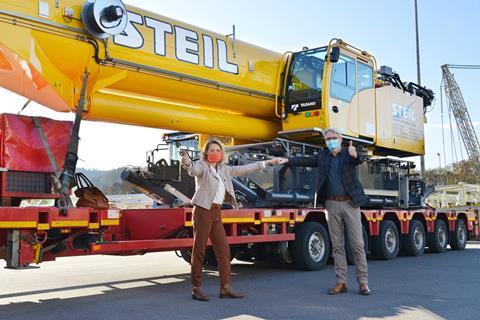 With a lifting capacity of 156 tonnes and a maximum load moment of 590 meter-tonnes, the GTC-1800EX crawler was developed and manufactured at the Tadano Demag facilities in Zweibrücken, and sold under the Tadano brand name.

According to Tadano, this is the first unit to represent the integration of the Tadano and Demag brands.

Birgit Steil, general manager at Steil, said the company expects the crane to save time and money due to its short set up times and logistical advantages. “With its intelligent IC 1 Plus control system, it has the advantage that it automatically determines the available lifting capacity under consideration of factors such as ground inclination and the track setting,” Steil said.

He continued: “The crane’s powerful carrier delivers high tractive power and allows for stepless variable track width adjustment – even asymmetrical configurations are possible, which make it an extremely versatile machine under all-terrain conditions.”

Steil said the crane will be used primarily at work sites in confined conditions and on difficult terrain, but will also be useful for installing prefabricated concrete elements.

After the handover, the GTC-1800EX was taken to a wind farm in the Black Forest region in Germany, where it was used to lift rotor blades and disassemble a Demag CC 3800-1.