North Refineries Company (NRC) has taken delivery of three Tadano GR-300EX-3 rough-terrain cranes that will be put to work at its refinery in Baji, Iraq. 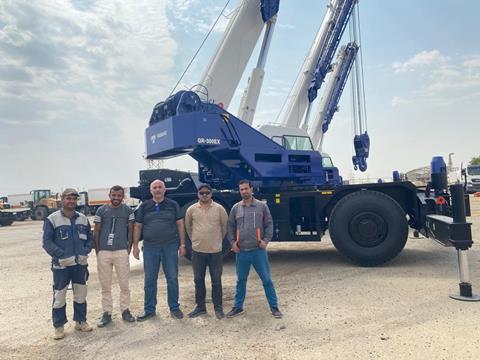 The GR-300EX-3 has a lifting capacity of 30 tonnes and a boom radius of 31 m. Selected for their manoeuvrability, the cranes will be deployed inside the refinery to assist in lifting pipes, damaged equipment, tanks, heat exchangers, and valves.

Other Tadano cranes in NRC’s current fleet include four GT-600ELs, two GT-300ELs, and one GT-750EL. Despite temperatures that often exceed 40-45°C, the cranes can operate in all weather conditions except for high winds or heavy rains.

“We are using the cranes on a daily basis as we have heavy loads to lift,” said Sudad Ibrahim Majeed, senior chief engineer, NRC. “We have been very satisfied with Tadano’s high quality. We have had good experiences, particularly with the manoeuvrability of the GR series.”

NRC, which works in conjunction with Iraq’s Ministry of Oil, has also ordered three GR-130EXs that are expected to arrive by the end of the year.