Crane and heavy haulage specialist Autokrane Schares has installed the framework of a bridge over the River Lippe in Germany using two Liebherr LTM 1500-8.1 cranes. 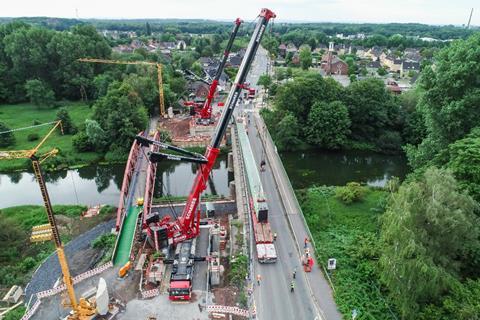 The framework consisted of three steel girders, which were transported from the storage site onto the existing bridge using SPMTs – each weighed 168 tonnes and measured 58 m long.

Schares positioned the 500-tonne capacity mobile cranes on each side of the river. Eric Reichmann, manager of sales, engineering and projects at Schares, explained: “The cranes had to be moved into position on an auxiliary bridge and were then supported on concrete foundations, which had been specially built for the crane work.

“Setting up the cranes from there was a challenge as the ballasting procedure had to be carried out with a very large radius over the undercarriage cab.”

The LTM 1500-8.1 cranes were each ballasted with 165 tonnes of counterweight. In the final load support position, the cranes had 84 tonnes on their hooks at a 16 m radius and positioned the girders on the temporary abutments in a tandem hoist.

The bridge is scheduled to be completed by the end of 2021.