A green current for Damen

Dutch shipbuilder group Damen has launched the fully electric RSD-E Tug 2513 into the water at its shipyard in Song Cam, Vietnam. 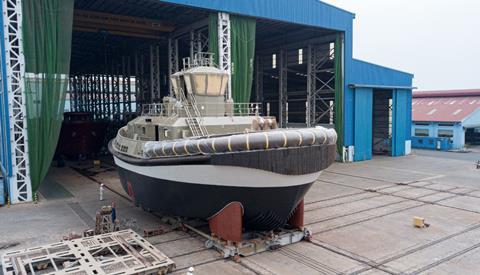 Damen is building the RSD-E Tug 2513, which has 70 tonnes of bollard pull, for New Zealand’s ports of Auckland to support it in achieving sustainability targets – including its goal to being a zero emissions organisation by 2040.

The next stages of construction of the tug – to be named Sparky – will see Damen install the vessel’s innovative hardware.

Damen has its own sustainability goals. The company said it aims to become the most sustainable shipbuilder by ensuring that its products environmentally clean and that the processes by which it makes them are optimally efficient.

Sparky is scheduled to be delivered to the ports of Auckland at the end of 2021.