In 2019, the port of Bilbao in Spain handled 142,000 tonnes of wind turbine components. The sector is forecast to grow in the years ahead and the port is positioning itself as a hub for wind energy cargoes. 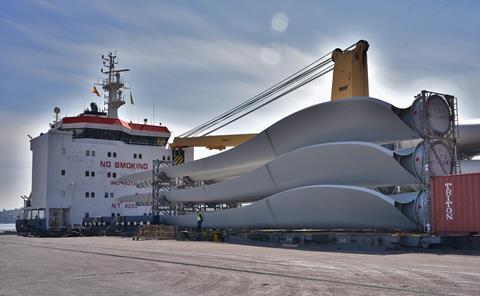 Specialists in handling project cargo, the port of Bilbao handled 4,099 ‘special parts’ in 2019, including units weighing up to 500 tonnes and other components measuring 70 m long. So far this year, 2,295 special consignments have flowed through the port – an 11 percent increase on the same period last year.

Wind energy shipments are an important part of that cargo mix. The first half of 2020 saw the port handle 96,711 tonnes of wind energy cargoes. This represents a 23 percent increase on the same period for 2019 and includes engines, rotors, blades and other equipment – some of which are manufactured in the port.

Companies such as Haizea Wind, Lointek, Navacel and Vicinay Cadenas manufacture parts on the port quays and ship them all over the world, while other OEMs – Siemens Gamesa, Acciona and Sakana, for example – use the port as an export hub.

Developments in wind energy show no sign of abating. Rather the sector looks set to embark on an upward trajectory.

According to the International Energy Agency (IEA), the offshore wind energy market will multiply 15-fold and is on course to attract trillion dollars worth of investment by 2040, leading to an energy revolution similar to that of unconventional hydrocarbons and solar photovoltaic, said the port.

In Europe, the European Commission has proposed to increase the budget of the Just Transition Fund (which will be used to help regions through the transition to climate neutrality) to EUR37.5 billion (USD44.5 billion) from EUR7.5 billion (USD8.9 billion) – as part of the EU Recovery Plan.

The port also referenced the approval of measures in Spain that promote the transition towards a 100 percent renewable electricity system and encourages economic recovery in line with the European Green Pact.

The regulation, according to Bilbao, removes barriers to the massive deployment of renewable sources, defines new business models and promotes energy efficiency, among other issues.

Aligning itself with the growing wind energy market, the Port Authority of Bilbao is embarking on a number of initiatives to solidify its position as a hub for the sector.

Earlier this year, the port and the Provincial Council of Bizkaia approved a plan to create up to 11 lay-by areas on the N-240 highway, which links Tarragona to Bilbao.

The stop zones will be located between Zeanuri and Bedia and will be able to accommodate specialised vehicles; the widths of the lay-bys will range between 5.5 m and 13 m, while the lengths will be between 107 m and 243 m.

According to the port, the N-240 is widely used by special transport vehicles and is the main route between companies that manufacture heavy components, such as wind energy equipment.

The Port Authority is also a member of the Wind Europe Ports Platform. It participates and supports a variety of projects designed to achieve maximum sustainability, while identifying new opportunities in the development of wind energy.

Meanwhile, the port has been busy creating more land for logistics and industrial use; works on the first phase of the new central quay have been completed, creating a new surface area in the port in excess of 300,000 sq m, with a 1,100 m-long berthing line.

Further development works in this area will be conducted in three stages. The first, covering 201,399 sq m, has just been awarded EUR8.5 million (USD10 million) in funding, with an eight-month completion period.

Works for the extension of Dock AZ-1, which will generate 50,000 sq m of new surface area and a new berthing line of just over 200 m, will be tendered out this autumn.