At the turn of the year, deugro Denmark celebrated its 20th anniversary. Since its establishment in 2003, the Danish division of the project forwarder has completed 214 wind energy projects in over 40 countries — a total of 3,835 wind turbines equalling 9,044,000 freight tons. 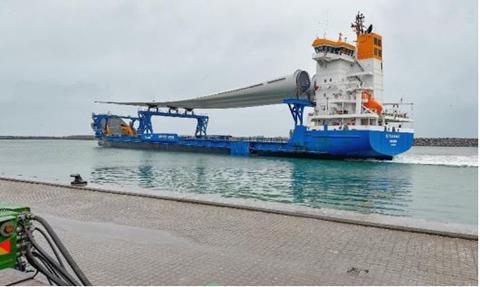 Image source: deugro; B115 blades on the Rotra Mare leaving the port of Aalborg, Denmark.

Based in Herning, Middle Jutland, deugro Denmark is close to the booming wind energy industry and its turbine manufacturers.

Highlights within the past 20 years, according to deugro, include the Scottish Whitelee project in 2009, which was the largest onshore wind farm in the world at the time, and the Swedish Björnberget onshore project with a total volume of 500,000 freight tons (nearly 50,000 tonnes) and consisting of 840 wind power components. That project also included tower segments with a diameter of 6 m – the largest onshore tower segments ever transported by deugro. They were moved from the ports of Gävle and Soderhamn to the project site in Björnberget, Sweden.

deugro Denmark has also coordinated the transport of 115 m-long blades from the port of Aalborg to the port of Hanstholm using its specialised Rotra vessels. These blades are part of the newest Siemens Gamesa offshore prototype wind turbine to be commissioned and tested at the Danish National Wind Test Center.