FROM THE MAGAZINE: Pumping up power 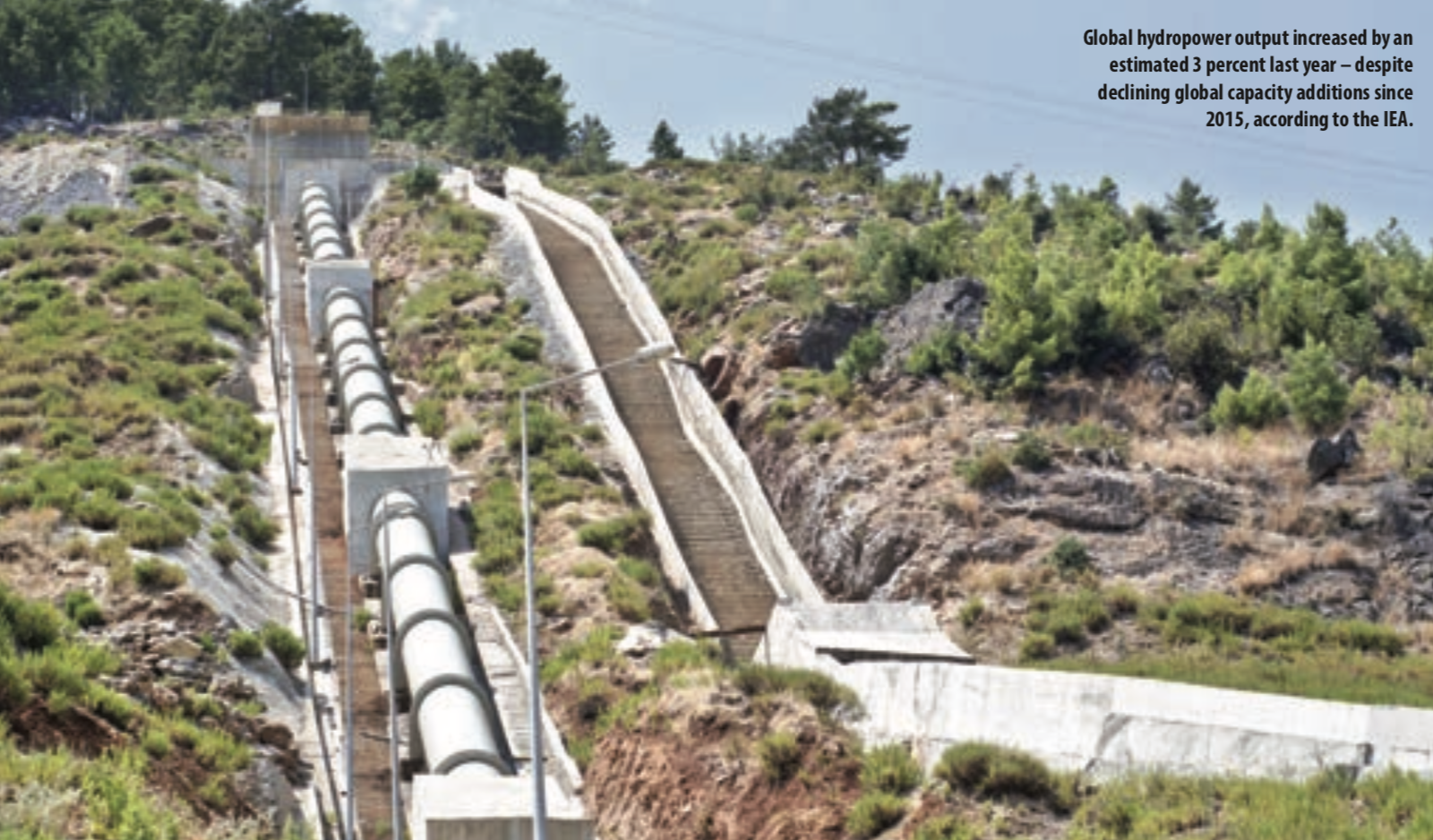 There is a growing determination in many parts of the world to eliminate dependency on fossil fuels. The switch to cleaner, ‘greener’ sources of energy is well under way.

Bhutan, meanwhile, is actually carbon negative. It produces far less carbon than is absorbed by its heavily forested terrain – much of which is protected by law. The country also exports a large proportion of the hydropower it generates.

According to the International Energy Agency (IEA), renewable energy installations increased by
4 percent in 2018 and renewables-based electricity generation increased at its fastest pace this decade.

“Solar photovoltaic, hydropower and wind each accounted for about a third of the growth, with bioenergy accounting for most of the rest,” the IEA reported.

The IEA added that global hydropower output increased by an estimated 3 percent last year – faster than in 2017, despite declining global capacity additions since 2015. One reason for the acceleration was Latin America’s recovery from a previous period of drought.

Producers of renewable energy are ever at the mercy of somewhat unreliable sources. Wind levels and speeds may vary, while sunshine and rainfall are intermittent. And when drought hits a country dependent on hydropower, it can have a significant impact on that nation’s energy security. The 2019 Hydropower Status

“The drought partially accounted for power rationing in Venezuela, and the fall in reservoir levels prompted Brazil’s highest energy imports in 17 years, with 1,131 GWh coming from Argentina and Uruguay in 2018.”

A project such as the modernisation of the 1,890 MW Argentine-Uruguayan Salto Grande hydropower plant is one manifestation of how variations in climate and installed capacity is leading to regional cooperation to avoid energy deficits.

Uruguay itself ranks ninth in South America for total hydropower capacity with
1,538 MW installed, according to the IHA.

Guillermo Moncecchi, Uruguay’s minister of industry, energy and mining, explained: “The share of hydroelectric energy in the electric mix is approximately 50 percent in an average year, which complements 27 percent of electricity generated from wind, 18 percent from biomass, 3 percent from solar power and approximately 2 percent from thermal power plants using fossil fuels.

“Simultaneously, Uruguay has changed the role that it traditionally occupied in the region as an energy sink, and since 2013 it has continued without interruption to be a net exporter of electricity to Argentina and Brazil.”

The IHA reported that in January 2018, Uruguay’s government obtained climate insurance worth USD450 million from the International Bank for Reconstruction and Development “to protect its energy utility from additional costs induced by drought and the need to resort to high-cost thermal generation”.

Taylor pointed out that the government recognised the “strong complementarity” between hydroelectric and other variable renewable energy forms such as solar power, a study having been conducted on that subject between 2014 and 2017.

The study also showed that “by managing energy storage or demand, it is possible to eliminate or significantly reduce the inclusion of new thermal generation plants in the next 30 years. Among other technological alternatives that could contribute to reach this objective, are pumped storage power plants,” Moncecchi outlined.

Storage of hydropower was a hot topic at the World Hydropower Congress, held in Paris during May 2019, given that reliability of supply is key to the sustainable future of clean power generation.

The idea is simple, said turbine manufacturer GE. Cheap solar energy produced during the day powers turbines that pump water uphill, from a low reservoir to a higher one. In the evening, when demand for power increases but solar generation drops, the water can be released to flow back downhill through turbines and generate electricity to fulfil that demand.

“It is not a new technology,” said Bill Armstrong, regional leader for GE’s Hydro Solutions in Europe, Middle East and Africa. “But the need for it is increasing now that two-thirds of the world’s future energy mix will come from renewables.”

That figure comes from the International Renewable Energy Agency (IRENA), whose director general Adnan Amin urged: “The share of electricity in total energy use must double [by 2050], with substantial electrification of transport and heat. Renewables would then make up two-thirds of energy consumption and 85 percent of power generation.”

IRENA said in its 2018 publication entitled ‘Global Energy Transformation: A roadmap to 2050’ that “solar and wind capacity will lead the way, rising from 800 GW today to 13,000 GW by 2050. In addition, the output of geothermal, bioenergy and hydropower will increase by 800 GW over the period.”

GE remarked: “Hydro storage provides reliability and flexibility to a renewables-based grid by creating a huge, continuously rechargeable battery that is entirely powered by the elements. All you need are healthy solar and wind power capacity, some water and the means to pump it uphill.”

Uruguay enjoys just the mix of energy sources that would benefit from – and, in turn, complement – pumped storage power plants, thus overcoming the problem of volatility.

GE added: “Hydro storage has an edge over common lithium- based batteries, because the technology behaves in the same way and does not need replacing several times during the 100-year life span of a hydro storage project.”

GE concluded: “If Uruguay can use hydropower to get to zero emissions, it could serve as a beacon for other countries struggling to move to renewable energy.”

Uruguay is not alone in focusing on hydro storage at present. To the north, there is talk of retrofitting pumps at the Hoover Dam; many hydropower plants in the USA already use pumped storage, according to the country’s National Hydropower Association.

In Australia, meanwhile, there are plans to use the Snowy Hydro plant to store energy as part of the country’s plan to switch from a heavy reliance on coal to more environmentally sustainable sources of energy.

This article is taken from HLPFI’s July/August 2019 edition.