ALL Crane in tandem with Liebherr 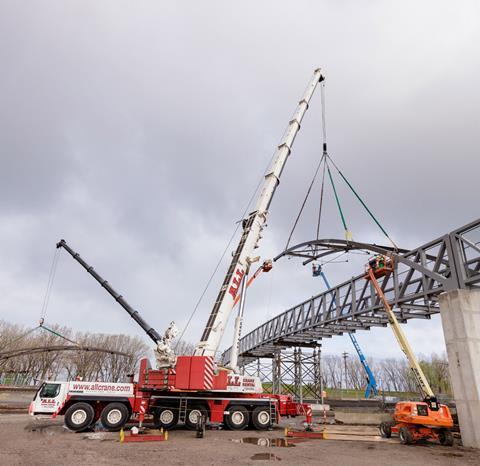 The three-span pedestrian and cycle bridge runs over busy railways tracks; ALL Crane worked closely with the railway to gain the work-clearance time needed to set the spans of the bridge.

Prior to the tandem lift, both cranes had already been put to use. The two 38 m bridge spans, which weighed 38.5 tonnes, were set on their respective abutments and temporary structures toward the middle, as well as a 75 m centre span resting on the temporary structures.

By installing the arch, which would assume the bulk of structural support duties for the entire bridge, the temporary structures below could be removed, and the bridge would be essentially complete, Liebherr explained.

During the 60-minute window, crane operators held each arch piece in position as a dozen ironworkers, six in man lifts and six on the ground, installed scores of bolts at splice points.

Plans for the lift were submitted months in advance to Norfolk Southern Railway. Dan Lewis, project supervisor for Youngstown Bridge, had his team perform several pre-lift tests to make sure they would be ready to make the most of their time. “This gave our ironworkers the opportunity to fine-tune the rigging of each arch section, incorporating the actual crane configurations that would be used on lift day.”

ALL Crane also provided several other pieces of equipment for the jobsite, including various aerials and a forklift.

Liebherr added that when the window for the operation was moved up by three days, ALL Crane was able to mobilise the 250-tonne capacity LTM 1250-6.1 on short notice.