Dogger Bank progresses as offshore wind booms in the UK 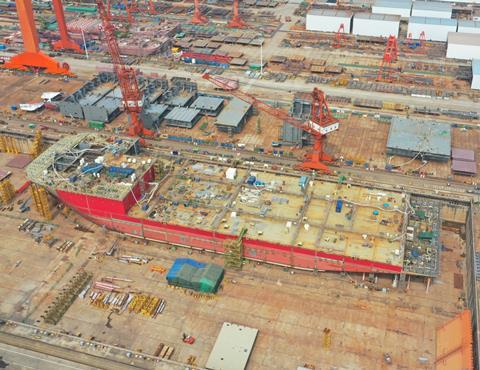 OHT’s Alfa Lift is currently under construction in China.

Comprising three phases – Dogger Bank A, B and C (formerly Creyke Beck A, Creyke Beck B and Teesside A, respectively) – the project will be one of the world’s largest offshore wind farms, located 130 km off the north-eastern coast of the UK.

The newbuild installation vessel Alfa Lift, which will join Offshore Heavy Transport’s (OHT) fleet next year, will install the foundations of the first phase of the project, Dogger Bank A. After being named a preferred supplier for the foundation installation in November 2019, OHT said that the contract for the second phase, Dogger Bank B, is expected to follow in due course.

The foundations will be amongst the largest ever used for and offshore wind energy project and are scheduled for installation to be installed at Dogger Bank A between 2022 and 2023. Alfa Lift, which is currently under construction at China Merchants Heavy Industry’s (CMHI) shipyard in China, will transport the monopile foundations and transition pieces to the project site and install them in water depths up to 35 m.

Since the preferred supplier contract was announced last year, planning for the project has been under way and OHT said that is keen to engage with the local supply chain. Lars Kjuul Kristensen, project manager for Dogger Bank at OHT, said: “We are already in detailed discussions regarding supply contracts with multiple UK companies and we will soon be announcing details of some of the remaining key suppliers we are looking for.”

Handling the transportation and installation of two offshore high voltage direct current (HVDC) platforms for the first two phases of the project is Saipem. The company will utilise its state-of-the-art heavy lift vessel Saipem 7000 for the works, with both platforms consisting of a 2,900-tonne jacket and an 8,500-tonne topside.

The data will feed into the ground model for the Norfolk Vanguard and Norfolk Boreas wind farms, which will have a total installed capacity of 3.6 GW. The site characterisation work is split across two projects: the first will help Vattenfall optimise the wind turbine foundation engineering design; the second will assist Vattenfall in selecting the most efficient cable route from the onshore substation to the turbines.

Off the coast of Scotland, the GBP3 billion (USD3.9 billion) Seagreen offshore wind farm is progressing. Slated to be Scotland’s largest wind farm, the 1,075 MW joint venture between SSE Renewables and Total comprises 114 wind turbines. Saipem has been awarded an installation contract by Seaway 7 for the wind turbine foundations.

Further still, during June, Crown Estate Scotland – manager of Scotland’s seabed – launched the first round of offshore wind leasing in Scottish waters for a decade. The round, called ScotWind Leasing, could result in investments totalling GBP8 billion (USD10.02 billion).

Investors and developers are now able to register interest in obtaining an option agreement with Crown Estate Scotland for leases outlined in the Scottish government’s Sectoral Marine Plan for Offshore Wind Energy.