US imports of mobile cranes: a matter of national security? 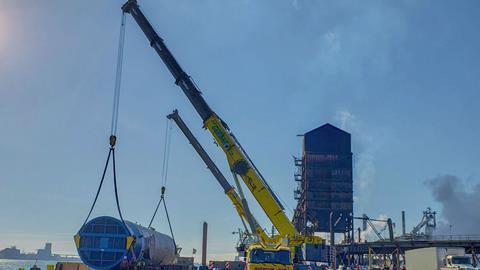 A petition filed by Wisconsin-based crane manufacturer Manitowoc Company in late December has sparked an investigation by the US Department of Commerce into whether the import of mobile cranes into the USA threatens to impair national security and harm domestic manufacturing.

As mobile cranes are frequently used in national defence applications as well as in critical infrastructure sectors, the Department of Homeland Security identifies the equipment as critical to industry. Manitowoc’s claim is that the prevalence of imported, low-priced mobile cranes – particularly from Germany, Austria and Japan – as well as intellectual property infringement by foreign competition have harmed domestic manufacturing.

The investigation could lead to tariffs on cranes imported into the country.

Manitowoc cited the US International Trade Commission’s (USITC) Dataweb to note that imports of mobile cranes increased 152 percent between 2014 and 2019. As a result, the company said it had to close one of its production facilities in the USA.

In support of the petition, Michael J. Anderson from construction equipment and Manitowoc cranes distributor Hoffman Equipment said: “It is abundantly clear to me that most foreign crane manufacturers are in essence dumping cranes into the US market at prices that are well below where our company can compete. Through currency fluctuations, lack of tariffs and/or value added taxes we have first-hand knowledge of transactions that defy economic logic.”

He noted that the situation has become more prevalent in the last five years and is evidenced by the number of US mobile crane manufacturers that no longer exist, for example Bucyrus-Erie, American Hoist, P&H, Lorain, Northwest Engineering, Pettibone, Galion, and Drott.

Frank Bardonaro, chief operating officer at Maxim Crane Works, also penned a letter in support of the petition. He believes that the amount of specialised equipment that is currently working in the USA as a direct result of shipments from European brokers, traders, dealers and rental companies is more of a concern than ‘new’ sales.

“[The dealers] get extremely heavy discounts from the foreign OEMs as well as financing packages, which allows them to ‘dump’ equipment into the USA and unfairly compete with US companies in the strategic end markets,” he said.

He argued that some form of tariff or fee should be considered for both new and used equipment. “If the used cranes are not considered as a part of this decision, it will continue to provide the foreign manufacturers a very easy and quick work around to bypass any rules that are placed upon the imports,” added Bardonaro.

The petition has also drawn criticism from other manufacturers and end users, however.

In its open letter to the Department of Commerce, USA-based manufacturer Link-Belt took issue with a number of Manitowoc’s claims. Notably, Link-Belt drew attention to the exclusion of two types of mobile cranes that Manitowoc itself reportedly imports – one of which “is so narrowly tailored as to cover only the specific type of all-terrain crane imported by Manitowoc,” said Link-Belt.

In its statement, Link-Belt added: “In other words, rather than generally exclude all-terrain cranes as a category, Manitowoc drafted a product exclusion designed to apply exclusively to their imported all-terrain cranes.

“Taken together, Manitowoc’s two exclusions in a petition that otherwise broadly covers mobile cranes suggests that Manitowoc is attempting to use the federal government to manipulate the market, and protect its own imports.”

A further issue, continued Link-Belt, is that cranes of these types, or cranes that are able to compete with those that Manitowoc imports, are manufactured in the USA.

”Any limitation on the use of our existing fleet for infrastructure work in the USA would have a substantial negative effect on our ability to serve our clients.” - Alan Barnhart

Many end users, meanwhile, have expressed their support for free trade and warned that tariffs would increase costs. The Specialized Carriers & Rigging Association (SC&RA) noted that domestic production of mobile cranes alone could not satisfy the broad range of demands of the lifting industry.

Some were more critical, stating that Manitowoc’s concerns are not matters of national security, but rather the result of its own misguided strategy. Simply put, one commentator said: “They let quality slip while others improved.”

Barnhart Crane & Rigging’s president Alan Barnhart said: “Our first preference as a US company is to buy US-manufactured products. But… these contemplated tariffs would have the exact opposite effect of their purported intent. These tariffs would have dramatic, detrimental consequences on many American businesses (large and small) and, more generally, on American commerce and American interests.”

He noted that many of his company’s clients are active in critical infrastructure markets, including wind farms, refining, petrochemical, power generation and transmission, telecommunication, and commercial building and transportation infrastructure. “In other words, our clients help build America. Any limitation on the use of our existing fleet for infrastructure work in the USA would have a substantial negative effect on our ability to serve our clients.”

Within this argument, Barnhart stressed that the leading German and Japanese-owned manufacturers have bought reliable and strong products with cutting edge technology to the market. “As owners, we along with our clients welcome multinational competition as it consistently brings to market diverse quality products with technological advances at fair/free market prices,” he added.

HLPFI will be taking a closer look at this issue in the October/November edition of the magazine. If you would like to share your thoughts, please get in touch with editorial@heavyliftpfi.com.