Antonov Airlines has transported three Rosenbauer Panther 6x6 fire trucks on an AN-124 flight from the Middle East to Central Asia. 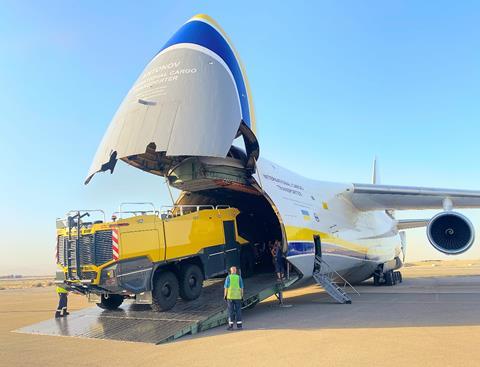 The fire trucks weighed 21 tonnes each and measured 12 m long.

Antonov Airlines flew the aircraft from its home airport in Kyiv, Ukraine, to the Middle East, before loading the trucks and transporting them to Central Asia.

A change in circumstances meant short-notice airfreight was the only way to delivery the cargo safely and on time, resulting in Antonov only having a week to find a solution.

“When Rosenbauer came back to us and described the developments that affected the movement of its fire trucks, Antonov Airlines was able to connect this cargo with flight schedules already operating in the region to provide a cost-effective and time-sensitive solution that met Rosenbauer’s demands,” said Ivan Bozhko, commercial executive at Antonov.

After arriving at the destination, the fire trucks were unloaded, and cargo for a separate project was loaded.