Baumann has used Goldhofer axle lines to move two heat exchangers to a port in Passau, Germany, on behalf of Linde Engineering. 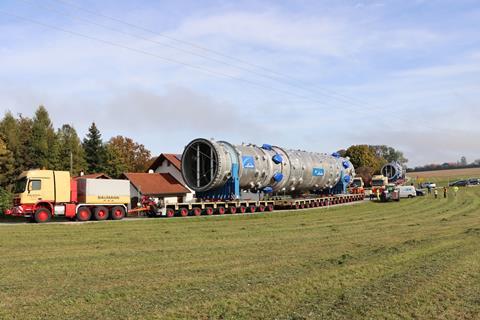 Due to the enormous size of the two vehicle combinations, the convoy had to travel mainly on secondary roads. In addition to the police escort, a route safety team with several vehicles was deployed throughout the journey to remove and subsequently replace obstacles such as road signs and traffic lights.

The Baumann team also had to overcome a large number of traffic islands and 90-degree bends. To navigate the mountainous landscape of Upper Bavaria, Baumann used six tractor units, which were used in push-pull combinations on gradients of up to 12 percent.

“For years we have been using Goldhofer heavy-duty modules, and they have now been replaced step by step with Goldhofer’s new THP/SL-L series to meet today’s increasing demands in terms of axle loads,” said Baumann’s fleet manager Matthias Kirschner.