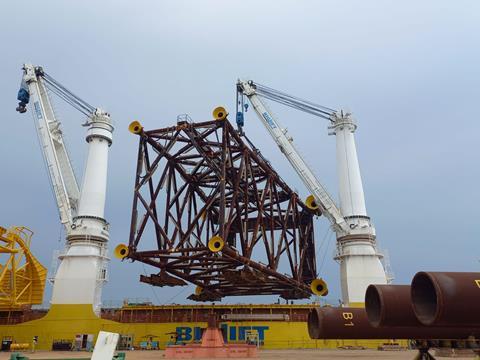 The GTA project will produce up to 10 million tonnes of LNG a year and is being jointly developed by bp, Kosmos Energy, Societe des Petroles du Senegal (Petrosen), and Societe Mauritanienne des Hydrocarbures (SMHPM).

Saipem and by McDermott picked BigLift Shipping to move 255 piles that form the basis of the loading facility’s offshore hub from Taicang, China. The piles measured between 1.8-2.1 m in diameter, 68-75 m in length, and weighed between 120-180 tonnes.

BigLift mobilised its P-8 and P-14-type vessels for the project. These vessels could carry up to 70 piles per shipment. Some piles were fitted with protrusions, so all piles had to be stored with 200 mm clearance, which also allowed removal and re-installation of the soft slings for lifting. To spread the loads, a timber hurdle was developed that was strapped to the top of the piles with a lashing belt, which also meant the hurdles could be pre-installed before loading.

“Safe access was needed to remove the timber hurdles prior to discharge and to reinstall the lifting slings. After internal discussions with many departments within our group and a Dutch company specialised in safe access at heights, a system of a horizontal zipline, fitted with two self-retractable lifelines (SRL) was developed. This line was suspended from towers for all works on deck, and from the coaming edges for all works in the tweendeck and lowerhold,” explained the carrier.

The piles were loaded in tandem lifts over starboard side and each vessel needed about nine to 10 days to load all piles. The vessels sailed from Taicang, via Singapore for bunkers, around the Cape of Good Hope to the Tortue hub, a distance of 11,292 nautical miles.

The location where then pins would be installed lies behind a 1,000 m-long breakwater. Despite swell conditions, discharge was achieved as planned. A pile was discharged roughly about every 12 hours to a DP2 pipe supply vessel (PSV). This PSV delivered the piles to a jack-up barge that upended the piles and drilled them into the seabed.

Each BigLift vessel spent between 40-55 days at the hub until all piles had been discharged.

BigLift has also been involved with another part of the Tortue development: the subsea production system, which McDermott is fabricating. The production system ties back approximately 70 km to a spread-moored FPSO positioned at the shelf edge in 100-120 m deep water.

The FPSO undertakes gas pre-treatment before exporting it 35 km to the nearshore hub where the gas is liquefied and offloaded to LNG carriers. The pipelines coming from the production location are led over a riser support structure (RSS) before going up to the pre-treatment FPSO.

The RSS consists of two main components: the tower (800 tonnes, 50 m x 27 m x 20 m) and the arch (400 tonnes, 35 m x 20 m x 12 m). BigLift was contracted to transport these structures from McDermott’s yard in Batam, Indonesia, to Nouakchott, Mauritania, using the Happy Star, and to transfer the cargo to two barges destined for the offshore location.

The shipment also comprised four piles (62 m long) to secure the structure to the seabed and roughly 30 other loose components. “The main challenge on this transport was to safely transfer the main structure components to the barges at Nouakchott. The port is exposed and known for a strong, incoming swell. Lifting these large and heavy objects onto a significantly heaving barge is an exacting operation,” said BigLift.