Earlier this year, Hareket was involved in the launch of Damen’s first fast crew supplier (FCS) 7011 vessel in Antalya, Turkey. 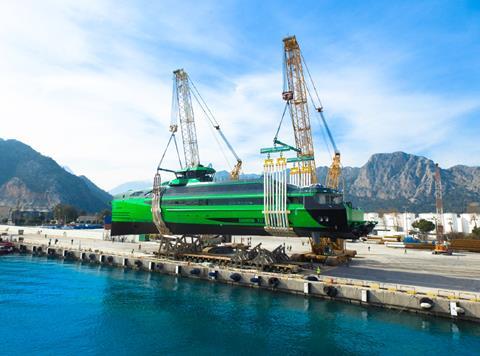 Damen said that it developed the FCS 7011 as a cost-effective crew transportation alternative “to meet the needs of an offshore industry faced with consistently low oil prices”. It is capable of transporting up to 120 personnel in a single trip.

Measuring 73.6 m long and weighing 410 tonnes, Damen added that it is the largest vessel to be launched in Antalya Free Zone. It required the support of heavy transport specialist Hareket, which deployed a combination of conventional hydraulic trailers and SPMTs to move the unit from the building shed.

The hydraulic trailers were used in a 2 x 24 axle line combination, as were the SPMTs.

Two crawler cranes, with a tandem lifting capacity of 600 tonnes, were then utilised to gently place the FCS 7011 in the water.