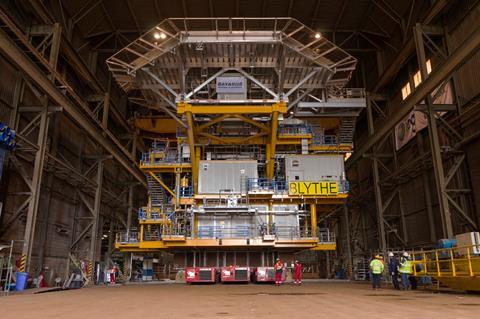 Mammoet’s traditional fuel of choice has been diesel, although it has been adopting new fuels as the technology becomes viable. This began in 2015 with its fleet in the Netherlands moving to gas-to-liquid (GTL) fuel, which emits fewer particulates.

The company’s latest step has been the integration of HVO into its power pack units (PPU). Because this diesel is both derived from renewable sources and reduces waste it is considered 90 percent carbon free. It also gives off fewer direct exhaust emissions, including a reduction in nitrogen oxides.

Mammoet worked with its client HSM Offshore to move two topsides – Southwark and Blythe – that will form key parts of normally unmanned installation (NUI) platforms located in the UK part of the North Sea. The topsides, weighing 900 tonnes and 1,150 tonnes, were moved using 22 axle lines from Mammoet’s standard SPMT fleet.