A made-in-Florida World War II tug has returned to Jacksonville. The Tiger ST 479 arrived at the port of Jacksonville (Jaxport) from Sweden onboard the Spliethoff multipurpose vessel Snoekgracht. 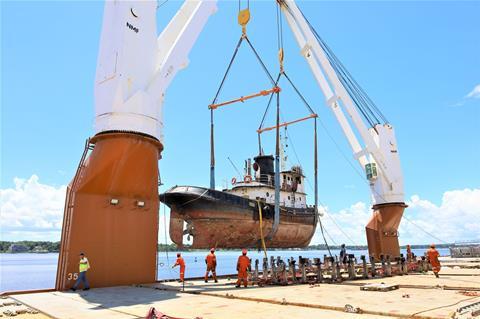 The 140-ton (127-tonne) tug was built in 1944 near DeLand, Florida, and its engine was installed in Jacksonville. During the war, the tug is believed to have been used to conduct rescue missions and carry supplies from the UK to Normandy, France.

DeLand Historic Trust president Dan Friend worked with Jaxport’s director of specialty cargo Rick Schiappacasse to ensure the tug’s safe return; private owners donated the vessel to the trust, which plans to use it as a national monument dedicated to the crews and builders of the US Army harbour tugs.

Snoekgracht delivered the tug to Jaxport’s Talleyrand Marine Terminal. The vessel’s own cranes offloaded the 86 ft (26.2 m) long tug onto the water, after which Cross State Towing guided it to a private dock in Jacksonville.