Van Oord’s offshore installation vessel Aeolus is lined to up to receive a major crane upgrade. By installing a new, longer boom on Aeolus’ existing crane, the vessel will be ready to handle up to 15 MW turbines for offshore wind energy projects. 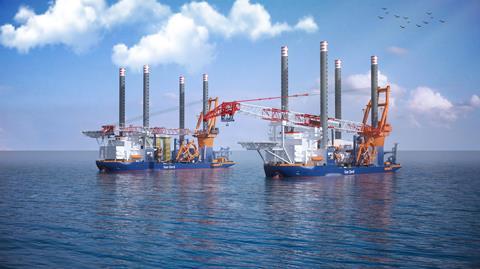 The 133 m boom is being designed and built by Huisman and the upgraded Aeolus will be fit for duty from early 2023. The vessel will then be capable of installing the new generation 12-15MW turbines while maintaining its lifting capacity of 1,600 tonnes for foundation installations.

Construction of the company’s newbuild jack up vessel is also in full swing. Boreas, which is being built in China, will be able to operate on methanol, and capable of installing wind turbines of up to 20 MW.

The vessel will be 175 m long and can lift more than 3,000 tonnes. In August, the steel cutting ceremony was performed and construction is running on schedule. Boreas is expected to enter the market in 2024.

Calypso, meanwhile, will be operational next year. This DP2 vessel will be equipped with a below-deck cable carousel and a second carousel on deck, with total cable-carrying capacity of 8,000 tonnes. Apart from the ability to run on biofuel, this hybrid vessel has future-fuel ready engines with built-in flexibility to anticipate e-fuels. It will have a large battery pack, a shore supply connection and a state-of-the-art energy management system, said Van Oord.