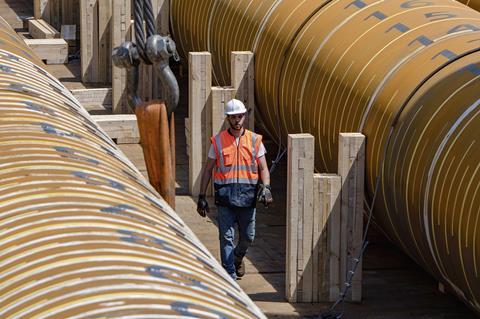 deugro coordinated the moves with shore-based cranes, local agents and the multipurpose vessel BBC Livorno, while dteq dealt with the design of the saddles and 3D analysis of the cargo prior to the operations.

A main challenge during project execution was the limited crane capacity at the required outreach. To overcome this issue, the first pin was loaded onto the starboard side before the vessel was then rotated for loading on the port side. The pins were then stacked in a specific order calculated prior to the operation.

In preparation for shipping, seafastening was designed in a way that would neutralise the effects of vessel accelerations. To ensure that each units’ weight was distributed evenly, a load spreading design was developed by dteq.

dteq also worked with the carrier in defining specific deck strong points for the pontoons to accommodate the high loads on the tween deck.

Due to ongoing works at the port of destination, the hatch covers of the vessel had to be unloaded onto a pontoon moored next to the vessel instead of quay side as it was initially planned.

Carlos Contreras, junior project coordinator, deugro Spain said: “The greatest challenge of this shipment was maintaining a relentless coordination of all operations and involved subcontractors to achieve the excellence that defines deugro all around the world.”