Drewry’s Multipurpose Time Charter Index increased to USD10,920 per day in January, representing a rise of 3.3 percent on the December 2022 figure. 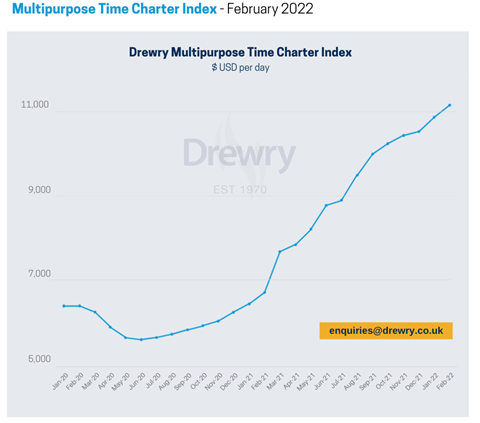 Rates were stronger than expected over January and as such Drewry’s Index is up 68 percent since January 2021. Drewry said it now expects a further rise in February of around 2.6 percent to USD11,200 per day.

The growth in January was largely supported by a firm shortsea market, although rates here were steady rather than increasing, coupled with the continued rise in container rates and supply inefficiencies pushing charter rates for open multipurpose tonnage ever higher. The onset of Chinese New Year did nothing to calm the container sector and this kept multipurpose charters on the rise, especially for long haul/heavy lift capable vessels, said Drewry.

Port congestion in both the USA and Asia, coupled with increasing opportunities for renewable energy cargoes, especially offshore wind, has kept the fleet busy.