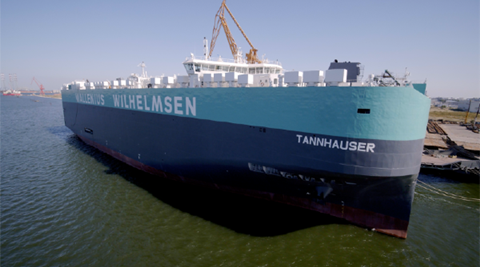 The vessel was built at the SCIC Xingang shipyard in China and has a capacity equivalent to 7,700 cars. As with its sister vessels Titus and Traviata, Tannhauser was designed with energy efficiency in mind.

The company said that extensive modelling was performed to optimise the hull to diminish drag and wave resistance, whilst the engine has been tuned for low-load operations that reduces fuel consumption.

Geir Fagerheim, senior vice president, marine operations at Wallenius Wilhelmsen, said: “Right now there is a capacity demand in the fleet and this new vessel type is more energy-efficient than some of our older vessels that are currently in cold lay-up.”

The HERO series is part of WW Ocean’s fleet renewal programme – which will see old tonnage replaced to improve efficiencies from both an operational and environmental perspective.