More and more companies from across the shipping sector are signing the Neptune Declaration on Seafarer Wellbeing and Crew Change, in a worldwide call to action to end the unprecedented crew change crisis caused by Covid-19. 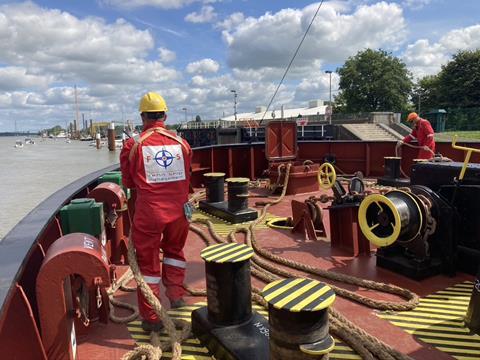 Now, more than 450 companies and organisations have signed the declaration, which calls for urgent action and identifies four principles as being key to addressing the crisis: recognising seafarers as key workers and treat them accordingly by giving them early access to vaccinations; implement high quality health protocols; increase collaboration between ship operators and charterers to facilitate crew changes; and ensure airline connectivity between key maritime hubs.

Germany’s EMS-Fehn-Group is just one of the companies signing the declaration. Its ceo, Manfred Müller, explained: “There is no doubt that seafarers are among those who have been hit the hardest by the pandemic. At EMS-Fehn-Group, we always put the wellbeing of the crew aboard our vessels first – especially since the outbreak of the pandemic. However, the past year has dramatically shown that efforts of individual companies, organisations and even governments do not suffice to improve the situation of seafarers worldwide in general to a substantial degree.”

Despite significant efforts by the global shipping and offshore industries, the situation is worsening as governments implement tighter lockdowns in the face of rising infection rates and the identification of new strains of the virus, said the International Marine Contractors Association (IMCA).

“Without seafarers, international trade and thus the standard of living most of us enjoy today would simply be unthinkable,” added Müller. “The crucial role seafarers play in today’s world has to finally be acknowledged. We need to combine forces. Everyone in the maritime industry and government institutions around the globe have to do their part to resolve the crisis brought about by the pandemic as rapidly as possible.”

IMO secretary-general Kitack Lim has welcomed the industry-led Neptune Declaration: “I am pleased to see the industry come together under the Neptune Declaration to support ways to resolve the crew change crisis. This very much reflects the calls made by IMO, its sister UN entities and more recently the United Nations General Assembly, in its recent resolution on seafarers,” he said. “I encourage more companies, including charterers, to get involved and show their support for our seafarers.”

The Liberian Registry has also signed the declaration. The flag’s chief operating officer Alfonso Castillero commented: “It is an honour for us to sign, and we pledge to continue our efforts in facilitating crew changes aboard our 4,600 vessels around the globe.

“Covid-19 has created unprecedented challenges, and we have been fighting for the facilitation of crew changes since the early days of the pandemic, working closely with industry bodies such as ICS and ITF, port and coastal states, and with the owners and operators of Liberian-flagged vessels.”

He added: “I want to thank the Global Maritime Forum, and the partner organisations in signing this important declaration. It takes courage to take this stand and fight for not only what is right for our seafarers, but for the maritime industry and world trade. There is so much more work to be done to solve this crisis, and we will continue to work day and night in support of this along with the other partner signatories of this very important declaration.”

The full list of signatories can be seen here.