With Boeing 747 production finally set to close – as the last B747-8 freighters are delivered to Atlas Air – heavy cargo twinjets will open up an entirely new battlefront between the two major airframers in 2022. 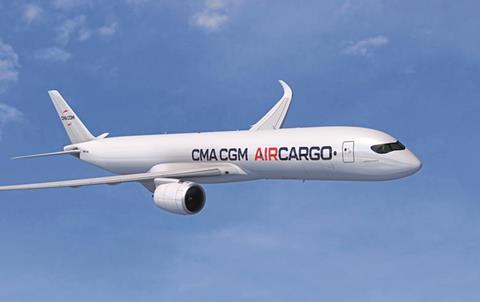 Airbus and Boeing might not agree on much, but their commercial outlook for the newbuild freighter market over the next two decades is markedly similar. Their respective forecasts to 2040 predict deliveries of 880 and 890 new freighters over the 20-year span – sufficient demand, Airbus believes, to warrant developing a dedicated freighter based on the A350 to address the 80-tonne part of that newbuild segment.

Airbus is committing to the A350F in a bid to end Boeing’s effective monopoly of the heavy freighter market, choosing to direct resources to a sector in which its track record has been sketchy.

While cargo capacity available through dedicated freighters matched that of widebody passenger aircraft just before the pandemic, Boeing says this balance tipped “decidedly” in favour of freighters (to as much as 80 percent) as passenger fleets were grounded during the crisis. Over the first half of 2021, dedicated freighters were still accounting for 70 percent of capacity, the manufacturer estimates.

Airbus insists it is not attempting to catch the ‘pandemic wave’ of cargo activity but rather focusing on the withdrawal of older three- and four-engine freighter types. Some 120 Boeing MD-11 freighters and 220 older-variant B747 freighters are in service.

Airbus expects total 80-tonne freighter demand to amount to 540 aircraft, but conversions of older widebody aircraft – particularly through emerging modification programmes for the B777 – will inevitably account for a proportion of this requirement.

Chief commercial officer Christian Scherer said the combination of twinjet efficiency and range is where “freighter economy shows”, and the manufacturer is “excited” about the A350F’s potential.

It will provide competition to the B777F, which has a payload capability of 102 tonnes and a range of 4,970 nm. Boeing has delivered about 215, with another 65 in the backlog.

But, in turn, Airbus will have to pitch a case against the economics of converting older B777-300ERs and -200LRs, to which the airframer does not have a direct response, and potentially defend itself against a freighter version of the B777X.

Israel Aerospace Industries (IAI) and Mammoth Freighters are developing conversion programmes for the 777-300ER, each providing a payload capability of around 100 tonnes. Mammoth has a -200LR conversion in progress, for which it cites a 106-tonne payload. IAI also plans to offer its own -200LR modification.

Airbus expects express freight traffic to rise at a faster rate than general cargo – some 4.7 percent, against 2.7 percent – and, as a result, it predicts the proportion of express freight in global air cargo traffic will rise from 17 percent in 2019 to 23 percent by 2040.

Boeing states that e-commerce had been rising at double-digit rates before the pandemic, driven by the convenience of online retail. It puts the traffic growth to 2040, compared with the pre-crisis baseline, at 4 percent.

It says there are indications of supply-chain diversification, and its forecast assumes “potential shifts” in specific destinations – but no “fundamental macro demand changes” to global supply chains served by air.