Both Toepfer Transport’s and Drewry’s multipurpose time charter indices report another rise in rates over the last month, albeit at a slower rate of growth. 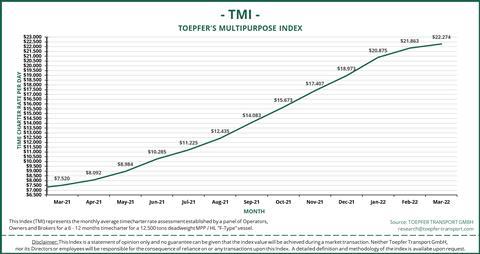 The average daily multipurpose time charter rate for a 12,500 dwt/F-type heavy lift vessel, according to Toepfer Transport, hit USD22,274 in early March. The value is a month-on-month increase of 1.88 percent. The forecast is that in six months, the rate will be down 0.39 percent. In 12 months, Toepfer expects the rate to decrease by 9.16 percent.

Drewry’s index increased to USD10,987 per day in February, representing a rise of 1.7 percent compared to the 2.2 percent increase seen in the previous month. Rates were in line with expectations over February, with a slight slowdown in rate growth. That said, Drewry’s index is up 69 percent since February 2021. 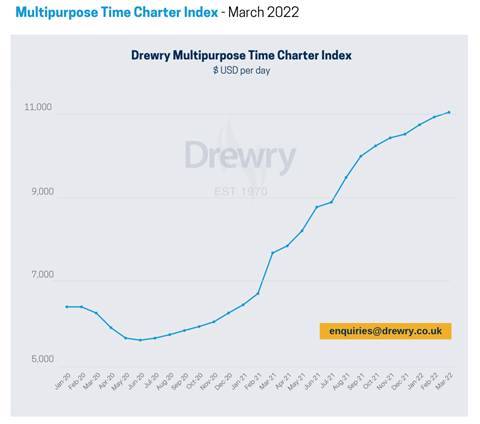 Both analysts commented on the current geopolitical situation. Toepfer said: “With the Far East as the key driver, the index rate remains stable at its high level. The impact of the war in the Ukraine is yet unclear and thus not reflected in the index rate. As a consequence of the various measures against the unlawful and pointless Russian attack on the Ukraine, many cargoes are stuck in Russian and Ukrainian ports and many industrial projects are on hold. The impact on the agricultural sector will cause the inflation rates to increase significantly, especially within the eurozone.”

Drewry said: “Whilst the geopolitical situation casts a huge cloud over all of us, the short-term implications are unclear. There remains very little spot market availability so any further rate increases due to the conflict are likely to be slow to hit the market. We do expect rates to continue to rise over March but again at much weaker growth rates of just 1 percent to USD11,100 per day.”

In terms of newbuildings, there have been some updates since Toepfer’s last report. AAL increased its order of its 30,000 dwt heavy lift vessels to six ships and UHL ordered another two F900-types from Hudong. Toepfer said that UHL is also in firm negotiations to place an order for super-heavy lift vessels in China.