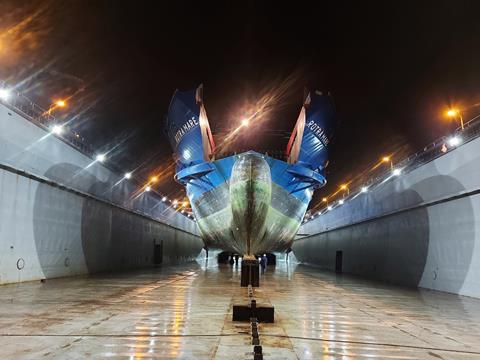 The current vessel will be cut in half, the bow will float out of the dry dock, and the new section will be placed in between. This section will first be adapted to the aft ship in the dry dock, after which the dock will be lowered for the attachment of the foreship.

While the Rotra Mare is undergoing works, Holland Shipyards Group is also working on the conversion of its sister vessel, the Rotra Vente. This conversion includes the installation of new sponsons on both sides of the vessel to increase the deck width to 23.6 m. The lifted bow will also be raised in order to be able to load the next generation of larger wind turbines.

The Rotra Mare is expected to enter service in January 2022, followed by the Rotra Vente in March 2022.