Under-the-jib equipment supplier Caldwell Group has customised a lifting frame that will be used during the transatlantic transportation of cryomodules. 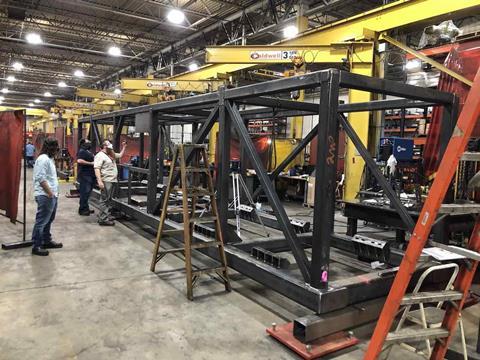 Fermi National Accelerator Laboratory’s (Fermilab) Proton Improvement Plan II (PIP-II) project includes the assembly of three high-beta cryomodules at STFC-UKRI in the UK. The completed modules must be transported to Illinois, USA. To achieve this a transport frame was designed to protect the sensitive modules during transit. The entire project was a collaborative effort involving extensive meetings between Caldwell, its Illinois-based distributor John Sakash, and Fermilab.

The 10.9 m-long, 2.2 m-wide steel frame weighs 5.8 tonnes unloaded and 18.3 tonnes loaded. Cryomodules will sit on seven aluminium cradles, also manufactured by Caldwell, within the frame for road transportation and aboard a Boeing 747-400F.

The frame features four lifting points to stabilise the load, connected to a top sling at an angle of 30 degrees to accommodate headroom requirements; the sling spread will be 7.07 m by 2.13 m.

Pete Sakash, of John Sakash, said: “This isn’t a level of engineering and manufacturing capability that is readily available in industry. The frame will likely be used on three occasions, but they must have complete trust in the whole system, given the value and importance of the load and the transatlantic journey it will take. Thusly, shock absorption was a major part of the design. The last thing that anyone wants is for the cryomodule to get shaken around during shipping. The type of shock absorbers that they’re using were specified by PIP-II engineers.”