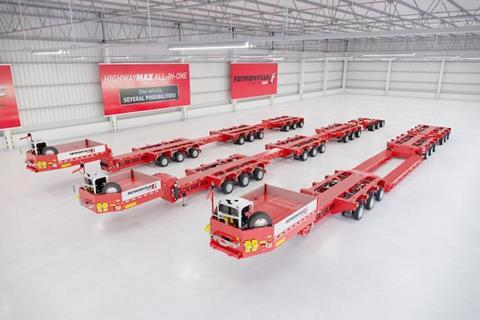 The trailer is designed to increase utilisation while decreasing overall operational costs, according to Faymonville.

The trailers have hydraulically steered axles at the front and rear, as well as pendle-axle technology with a 24-inch (60 cm) stroke, able to steer loads up to an angle of 60 degrees.

The fifth wheel load and axle-load can be adjusted in order distribute loads suitably. Faymonville said that after load operations have been carried out, the configuration can be reduced to a minimum overall vehicle combination length which significantly reduces the costs of unloaded journeys.

Rainer Noe, Faymonville product manager, commented: “A configuration as a tower adapter vehicle is also possible. And the entire range such as excavator decks, transformer decks, perimeter decks etc. can be integrated in the double drop version.”