Allelys has transported two 268.5-tonne super grid transformers from Ipswich docks to Bramford in the UK. 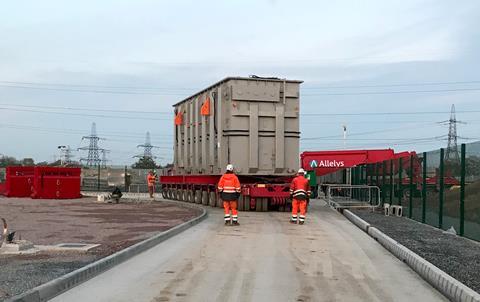 Due to the size and weight of the transformers, one potential route that involved crossing the Orwell Bridge was deemed unsuitable. Allelys therefore opted to use West Bank terminal to discharge the units from a geared vessel onto the company’s specialised trailers.

Allelys used a 500-tonne capacity Faktor 5 girder frame trailer from Goldhofer with extra width modular axles at each end to further distribute the weight and meet restrictions on the route. The overall transport length, including two MAN ballast tractors, was 77.5 m, with the combination weighing 550.6 tonnes in total.

The route from the West Bank terminal provided another challenge as it meant crossing a structure over Ostrich Creek, which had been downrated in capacity and no longer deemed suitable for abnormal loads. In order to cross this structure, the engineering department designed a 27.5 m-long overbridge that met the strict restrictions imposed by Suffolk County Council.

Route enabling works and the overbridging operation took place 24 hours prior to the planned delivery date. The overbridging required the use of two 200-tonne capacity mobile cranes to safely position load spreading mats and ramps at each end, before four 27.5 m-long, 23-tonne bridge sections were lifted into place.