Bridging the gap in Illinois

Central Contractors Service, part of the ALL Family of Companies, supplied a 250-ton (226.8-tonne) capacity Linkbelt hydraulic crawler crane and a 550-ton (499-tonne) capacity Liebherr all-terrain crane to set 18 precast girders as part of a bridge project in Illinois, USA. 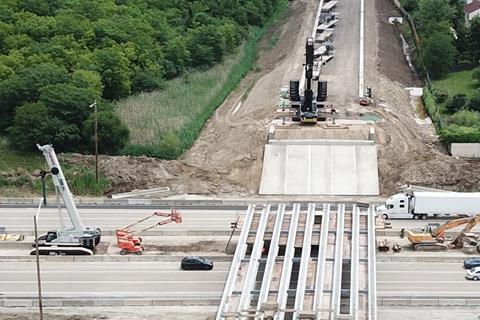 The lifts formed part of the replacement of the 70-year-old Stearns School road bridge with a three-lane precast concrete structure. Metropolitan Steel, which handled the bridge construction, called in Central Contractors to supply the cranes and operators.

Girders were trucked to the site on I-94 motorway, with the truck pulling as far onto the shoulder as possible. “These were large girders that took up half the highway,” said Dave Budzius, project manager for Metropolitan Steel. “The key was maintaining masterful logistics — get the girders in, make the pick, offload, swing, walk, and set.”

The Liebherr crane, positioned above on the abutment, connected first. Then the crawler, in the median below, picked the back end of the piece. Next, the operators would swing the girder in tandem, before the crawler moved up to place the girder in its final position.

After rigging was complete, setting each girder took around 45 minutes.