Collett moves ahead with M4 project

Collett & Sons has delivered 120 steel bridge girders from Cleveland Bridge’s factory in Darlington to the M4 smart motorway construction sites in the south east of the UK. 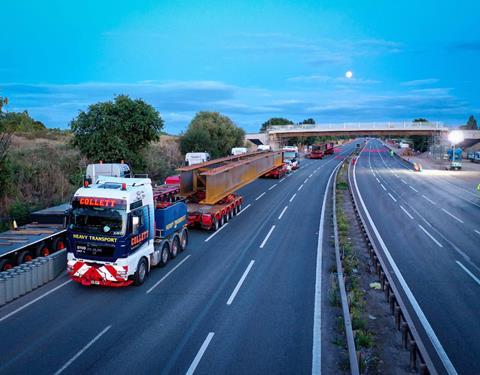 Collett’s project scope started in October 2019. Over the course of 10 months, the company transported girders to 12 bridge replacement sites, including the Monkey Island Bridge in Berkshire, as HLPFI reported here.

The bridge girders, which varied in length from 5.8 m to 44 m, were loaded at the factory in Darlington. The heaviest unit weighed 92 tonnes.

Richard Neath, senior project manager at Cleveland Bridge, added: “Many of the deliveries were made at night to keep disruption to the travelling public to a minimum and ensure steelwork was on site for the following day for assembly and installation.”

The bridge replacements form part of the M4 J3 to J12 smart motorway upgrade, which was set up by Highways England and aims to reduce congestion by adding an additional lane of traffic.