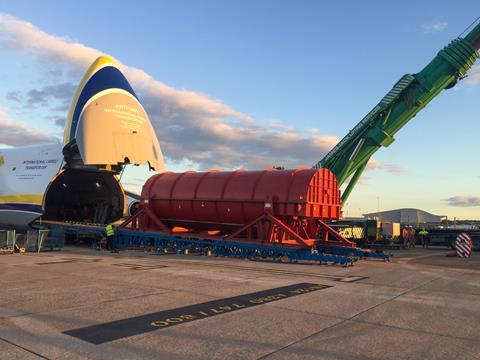 Working on a full contract lift basis, and under CPA Contract Lift Conditions, Collett’s engineers utilised a 500-tonne Liebherr LTM 1500-8.1 mobile crane to unload the cargo from the Antonov’s skid track. Having unloaded the rotor and integrated transport frame from the nose of the fuselage, Collett then loaded the cargo onto an awaiting 10-axle flat top trailer ready for onward transport.

Having liaised with North Yorkshire and East Riding Councils ahead of the project, Collett ensured any route modifications and necessary street furniture removals had been undertaken to allow the 4.5 m-wide cargo to safely navigate the 75-mile (120.7-km) route from collection in Doncaster to final delivery in Hull.

Travelling under abnormal load permits, and escorted by Collett’s pilot cars, the 19 m-long loaded vehicle travelled via Hatfield, Goole, Howden and North Ferriby, before safely arriving at Saltend power station on the banks of the River Humber, ready for offloading by the client.