Cometto’s SPMTs were deployed to assist in the positioning of an arch bridge as part of a railway expansion project in Luxembourg. 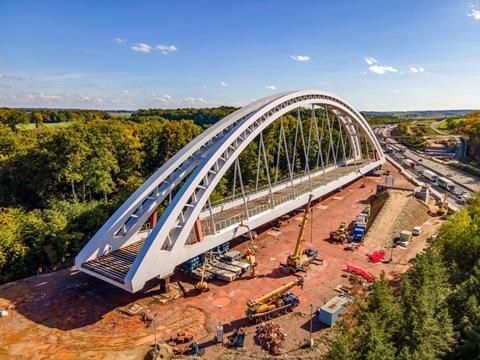 For the first stage of the operation, transport engineering specialist Sarens lifted the structure to a height of 5 m by performing a ‘pack-and-jack’ method with hydraulic presses.

180 axle lines of SPMTs were then used to manoeuvre the bridge into position.

Rui Raimundo, CFL project manager, said: “The new project is part of CFL’s ambitious expansion and modernisation programme. Alongside the existing line, this supplementary line represents a significant capacity gain for this heavily travelled section of the Luxembourg rail network.”

The self-propelled, electronically steered modular vehicles measure 2.4 m in width with a maximum load capacity of 48 tonnes on each axle.

The axle-lines will be deployed on operations in bridge, plant and ship construction.