Crane and special transport company Gertzen Krane has deployed Cometto SPMTs for the decommissioning of a nuclear power plant in Emsland, Germany. 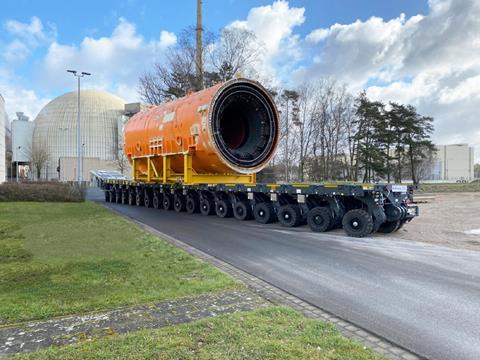 Although demolition of the plant is not due to commence until 2022, the first components are already being scrapped, said Cometto.

Gertzen Krane was contracted to remove a 391-tonne generator. Driver Ingo Wiggelinghoff assembled the 18-axle Cometto SPMT combination with a 202 kW power pack and a 25.2 m loading platform. Gertzen mobilised six axles from its own fleet and called in 12 further axle lines from Autokrane Schares.

The generator had to be removed from the safety area of the plant and manoeuvred around various bends. Cometto said that due to the electronic steering of the self-propelled vehicle with seven different steering programmes, Wiggelinghoff was able to guide the combination through even the narrowest bottleneck in the power plant.

The generator was then set down on support beams outside the area. The SPMTs were driven out from underneath the unit in its lowest driving positions before the generator was cut into small pieces for recycling.