After two years of planning, Omega Morgan’s specialised transport team in Canada is handling the delivery of turbine runners for a huge hydroelectric infrastructure project in British Columbia. 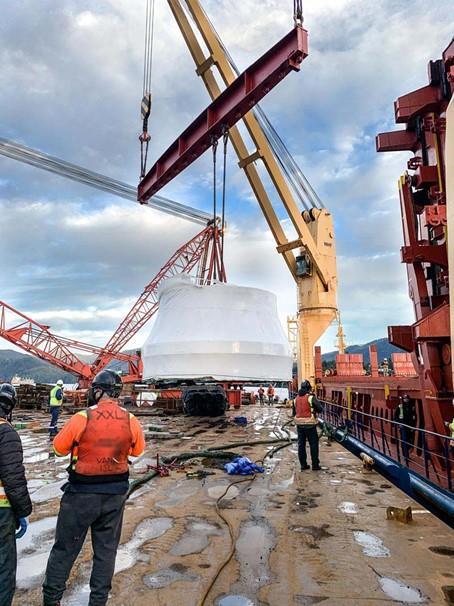 Once complete, the dam, located near Fort St. John, will provide 1,100 MW of capacity and about 5,100 gigawatt hours of energy each year to the province. Preparations at the site for the arrival of the six runners began in 2018.

Before wheels could hit the ground for this project, the team had to work with the province to execute a rigorous planning and permitting process. It was critical to be sure the components would make it safely to their destination — and have the least amount of impact possible on the surrounding communities and environment along the way, said Omega Morgan.

The loads – totalling approximately 349.3 tonnes – would have to navigate remote coastal highways to reach Fort St. John. These roads were not built with cargoes of this size or scale in mind and Omega Morgan’s team and to consider steep rock walls on one side of the route, and a steep drop off on the other.

Many of these highways are single lane and very narrow, added Omega Morgan, which meant that to allow convoys to pass a large portion of roads would need to be closed down.

“Our crew needed to laser-measure rock faces, corners, and roundabouts to be extremely precise about how our dual-lane trailers would navigate the route — sometimes down to a matter of inches as we cornered along narrow coastal roadways and entered roundabouts in small towns,” explained the heavy haulage specialist.

The transport plan also had to consider the local communities: “Between a long and complex permitting process, careful measuring and modelling, and an extraordinary amount of due diligence, our team worked to ensure the local communities would experience as little impact as possible during the moves. During certain portions of the trip, we had to shut down roads to the motoring public in several remote communities. Along with the province of British Columbia, we strove to make sure these shutdowns would last for as short of a time as possible.

“This was accomplished with a traffic management plan, meticulously planned and executed, that utilised multiple extra vehicles, sign boards, media blitzes and local news and media spots. This ensured the motoring public were prevented from entering into our crew’s drive line, and kept at a safe distance as we manoeuvred through the small communities and highways along our route in the dark of night.” 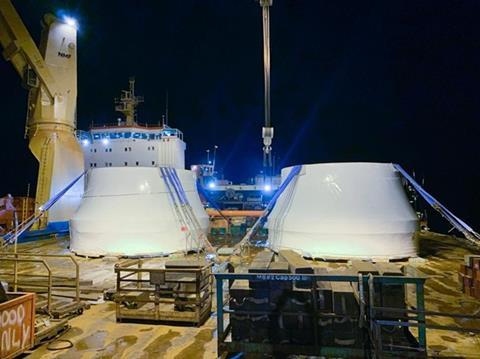 After two years of planning, the first transports could take place – albeit only during the winter months when the roads are frozen enough to bear the weight of the load.

The first two runners arrived at the port of Prince Rupert from Brazil and were loaded onto a barge, which then moved into an inlet where the units could be lifted onto Omega Morgan’s equipment using a 600-ton (544.3-tonne) capacity ringer crane.

This operation also took a significant amount of engineering and planning to execute, particularly during the significant tidal swings in the area that can range in excess of 26 ft (8 m) from low to high tide.

Once loaded and secured, the runners began the five-day, four-night journey to the site near Fort St. John.

Due to the sheer size and length of trailer configuration, there were very few feasible places to stop each evening; everything was carefully mapped out and precisely timed in order to reach the predetermined stopping points on each of the four nights. All throughout the trip, Omega Morgan’s crews navigated steep inclines and declines, mountains, coastal rain, snow, and narrow roads to deliver the first two turbines safely.

Omega Morgan said that its crews are turning their focus to next winter, when the next round of deliveries will commence, as soon as the roads are frozen and able to withstand the load.