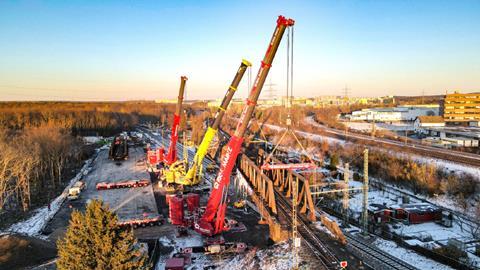 Both bridge structures measured 40 m x 13.7 m x 5.3 m and weighed 160 tonnes. They had to be positioned on 1.5 m-high concrete elements on a nearby asphalt surface. As the mobile cranes could not access this area, the structures needed to be lifted and loaded on to SPMTs.

The six-axle heavy-duty SPMTs then transported the components to the intended position and unloaded the units with the help of the trailer’s hydraulic systems.