During May 2021, Linde Engineering reached a key milestone at the Amur gas chemical complex in Russia – the transport of a 1,500-tonne quench tower. According to Linde, the move showcased the benefits of advanced work packaging (AWP). 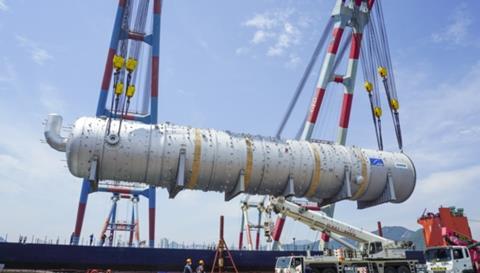 The Amur gas chemical complex is set to house the world’s largest steam cracker for ethane and LPG feedstocks. Mechanical completion of the site is scheduled for 2024. Linde is delivering several vital components and is calling on the expertise of its senior project director Harald Schubert and his global team to manage the megaproject.

Schubert explained: “We loaded up a key plant component – the quench tower – in [South] Korea to send it on its journey to the construction site in eastern Siberia. This column plays a vital role in cooling and purifying the cracked gas.” With a height of 80 m and diameter of almost 14 m, the quench tower is among the largest of its kind.

The shipping route included a 2,200 km stretch along Siberian rivers. “The rivers on this route are frozen over from mid-October to early May, and melting ice then clogs the mouth of the Amur River until early June, blocking passage. So our window of opportunity was only about 130 days,” said Matthias Pohlmann, logistics manager for the Linde project. “What’s more, we would only have a guaranteed water depth of 1.1 m for the last 212 km.”

The shipment also needed to pass under two bridges with a clearance of 11-16 m, depending on the water level. To enable transport of the quench tower under these conditions, Linde built a special barge, which was launched in Shanghai in May. The column was then loaded onto the barge in South Korea to embark on the voyage to Russia. Towards the end of May, the convoy reached the Russian east coast and, in early June, the port of De Kastri for its final leg upstream towards Svobodny and the Amur plant. On July 7, the plant component finally arrived at its destination.

“Successfully shipping the quench tower was not a standalone achievement, but part of a broader, finely tuned concept – which we executed efficiently and on schedule for our customer,” said Schubert. Implementing construction projects as complex as the one in Amur requires detailed, meticulous planning. To achieve this, Linde has been using AWP for the past few years.

“This approach is now gaining more and more traction in the industry because it improves the efficiency and predictability of construction projects,” said Eric Leimer, project director and head of the AWP core team at Linde. “AWP enables every step in the project workflow – from engineering through procurement to assembly – to be carefully aligned and planned, always with an eye on the finish line. It all comes down to thinking with the end in mind.”

The approach was developed in 2009 by the Construction Industry Institute in the USA and the Construction Owners Association of Alberta in Canada. AWP starts with concept development and extends through engineering and procurement all the way to construction and assembly. It therefore ensures that everything needed for a work package is available at the right time and in the right place – from a massive prefabricated plant module right down to the last nut and bolt, Linde explained.

Leimer and his AWP team are onboarded right at the start of a new project, at the concept phase. This involves defining the path of construction and developing the concept schedule, which maps core interdependencies and milestones to ensure smooth collaboration between engineering, procurement, and assembly. The Linde experts also integrate delivery times for specific materials at this point, so the individual work packages can be efficiently processed, one after the other.

“You can see why it’s so important to define and align work packages early on in AWP. This enables us to plan engineering documents at an early stage, place orders accordingly, closely coordinate the supply chain and organise site staff in good time. That then avoids idle time or downtime later on – cutting unnecessary costs,” explained Leimer.

In the case of the quench tower, Schubert said this involved “getting the plant component to the site at a very specific time. Late delivery would disrupt the entire construction schedule and jeopardise timely commencement of operations, but too early could be a problem too – say if the foundations were not yet in place or cranes not available to erect the tower. There’s no space for temporary storage, so that then has to be rented at high cost, or you have equipment blocking the construction site.”

To avoid this kind of scenario, all work packages for engineering and procurement are delivered in the order work is carried out on the ground. This ultimately aims to ensure that idle time, productivity losses and delays for construction crews caused by late deliveries are mitigated.

“Depending on the project and complexity, we might be looking at up to 4,000 individual work packages,” explained Leimer. “Added to this, of course, are key overarching documents such as the piping and instrumentation diagram (P&ID) and 3D plant model, which can be accessed by all project stakeholders,” Schubert added.