In collaboration with Flatiron Construction, Mammoet has installed the Wellsburg Bridge that connects West Virginia and Ohio, USA. 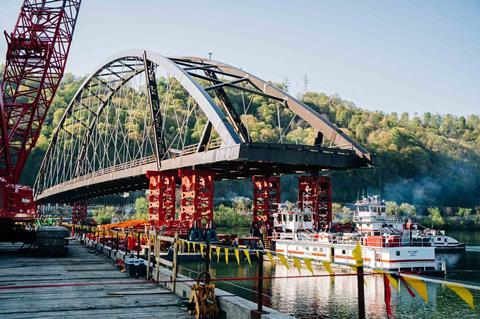 The bridge weighed 3,870 tonnes and measured more than 252 m in length.

Mammoet deployed its Mega Jack system to lift and install the bridge in order to minimise disturbance to ships on the river. An alternative strand jacking method would have the bridge hanging on strand jacks for at least two weeks. Instead, the work was planned to take place over two days.

Mammoet mobilised eight Mega Jack 5200 towers and eight 500-ton (453.6-tonne) strand jacks and installed the equipment onto four prepared barges in New Orleans, Louisiana. Flatiron Construction floated the barges to Wellsburg, West Virginia where Mammoet then took over the load of the bridge on its Mega Jack system.

Next, the jack-down operation began to precisely position the bridge on its bearings and to allow the barges to be floated away.

Forecasted windy weather conditions prompted a decision to expedite the schedule. So, the full float-in and jacking operation was completed in one day instead of two.