The Rhine Bridge in Leverkusen, Germany, is being replaced with an eight-lane structure. SEH Engineering contracted Mammoet to move one bridge section to its installation position. 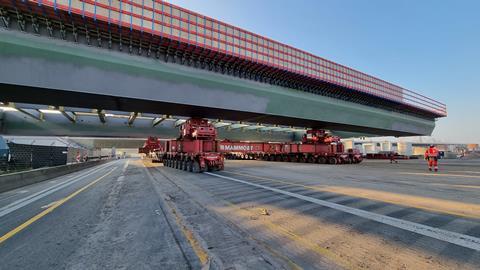 Due to its weight of around 1,100 tonnes and dimensions of 66 m x 34 m, a full closure of the A1 highway section was necessary. The simplest approach – stacking the bridge section on the abutment benches using climbing jacks – could not be used because the bridge has a slope in both the longitudinal and transverse directions. Therefore, the abutment benches would be both at an angle and at different end heights.

Instead, the bridge was lifted from its supports, driven it to the installation location and set down, all in one manoeuvre.

Four towers from the Mega Jack 500 range were mobilised for the job. This equipment lifts the load via the insertion of successive cassettes at ground level, reducing the need for work at height and manual handling onsite.

When Mammoet specialists arrived at the project location, final work on the bridge segment was still in progress. Due to a limited time window, lift preparations still began immediately.

Due to a hole in the ground at the pre-assembly site, the bridge section was not accessible to the SPMTs. The hole was needed for a pillar of the bypass bridge. Instead of filling and covering the hole, it was more efficient to slightly change the position of the bridge section by 1 m just before execution.

The repositioned bridge segment was lifted with four climbing jacks so that three combinations of SPMT axles could be driven underneath. The gantry girders and Mega Jack 500 towers were then erected on the SPMTs.

The bridge section was moved 300 m across the confined site to the installation location, then lifted several meters further so that it could be driven over the abutments of different heights, before being lowered and installed.

The new Rhine bridge is scheduled for completion at the end of 2023.