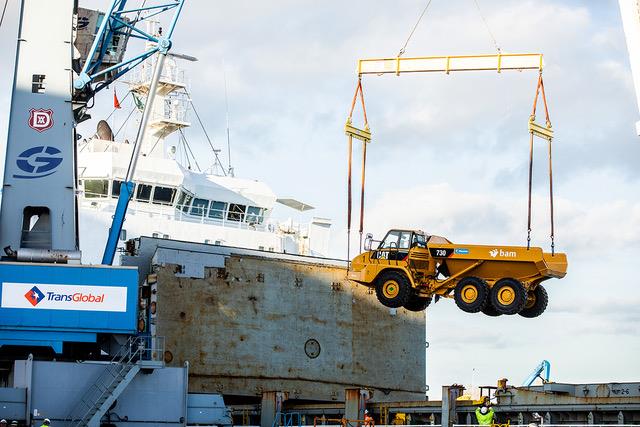 As no construction equipment or material was available on site in Rothera, TGP worked closely with BAM to consolidate, prepare and ship almost all of the necessary supplies for the wharf removal and re-construction on a single vessel charter.

While Antarctica has one of the coldest and harshest climates in the world, TGP explained that it also has unique and sensitive ecosystems that can be threatened by the incursion of non-native species of plants and animals.

The biggest logistical challenge facing the TGP team was therefore ensuring the shipment headed for Rothera remained completely contamination-free and complied with the British Antarctic Survey Biosecurity Handbook and the Polar Code.

Over the course of several weeks in late October and November 2018, TGP experts worked at AV Dawson’s facilities at Teesport in Teesside, UK, to perform decontamination and loading activities.

Prior to receiving the cargo, the biosecure facility at Teesport underwent deep cleaning. This was conducted in addition to a maintenance schedule of spraying insecticides, pesticides and herbicides in and around the facility on top of the manual inspection for the removal of weeds, rodents, insects and other pests.

“As far as we are aware, this project represents the first time such stringent export procedures have been carried out at a UK port facility,” explained Colin Charnock, TGP ceo.

The equipment, where deemed necessary, was also treated with residual insecticide solutions. All containers and loading equipment underwent fumigation, and only timber compliant with the International Standards for Phytosanitary Measures No. 15 (ISPM15) was used for export packing.

Once all the preparatory work had been completed, the shipment was loaded on board a geared multipurpose vessel on November 22. TGP added that the vessel itself also underwent a similar decontamination process in accordance with the biosecurity plan.

The RRS Sir David Attenborough is scheduled to come into operation in 2019 and has been under construction at the Cammell Laird shipyard in Birkenhead, UK.

Over the last 15 months, engineered transport provider and heavy lift specialist ALE has handled several phases of the vessel’s construction, including moving the partially completed polar research vessel, weighing 5,000 tonnes, from the fabrication hall to the slipway at the Birkenhead facility.

The vessel was moved 41 m using 216 axle lines of SPMTs and 26 transport beams.

In August, Kotug Smit Towage deployed four tugs from its fleet - Smit Barbados, Smit Waterloo, Smit Belgie and Smit Sandon - to tow the 10,000-tonne hull of the vessel to the Camell Laird basin.