Finnlines has taken delivery of Finneco I – the first of three hybrid ro-ro vessels in the Eco-class new building programme – from China Merchants Jinling Shipyard (Jiangsu). 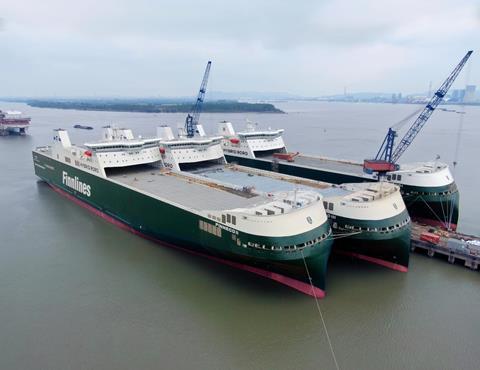 Compared with the largest vessels in Finnlines’ fleet, the cargo carrying capacity of the hybrid newbuilds will increase by nearly 40 percent. A hoistable deck enables loading of any type of rolling freight up to 7 m.

The classification society Rina has assigned an additional class notation ‘green plus’ for the vessel’s environmental performance. The vessel has been fitted with two-stroke main engines, which have a lower specific fuel consumption than four-stroke engines.

An air lubrication system under the keel will reduce frictional and hydrodynamic resistance and consequently reduce fuel consumption and emissions. Zero emissions during port calls can be achieved with a battery power bank of 5 MW. The batteries are recharged during sailing and 600 sq m of solar panels will also generate power.