Damen’s first all-electric harbour tug, the RSD-E Tug 2513, has been delivered to the Ports of Auckland (POAL). 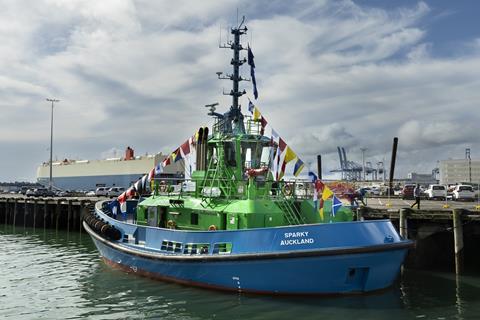 The tug was named Sparky and also received the Māori name, Tiaki, in a special blessing ceremony held in Auckland on August 8. This tug has a 70-tonne bollard pull, is capable of manoeuvring even the largest vessels, and can undertake two or more assignments before being recharged, which takes two hours.

In 2016, Ports of Auckland adopted the goal of becoming a zero emissions port by 2040 and, in light of the impetus to tackle climate change, the port authority challenged Damen to develop a fully electric tug.

HLPFI’s next issue contains our annual tugs and towage supplement. To receive your copy, subscribe here.