Norwegians team up for next generation of wind energy

Norway’s Ocean Installer and Vard are entering into a partnership to develop an installation vessel capable of handling the next generation of offshore wind energy components. 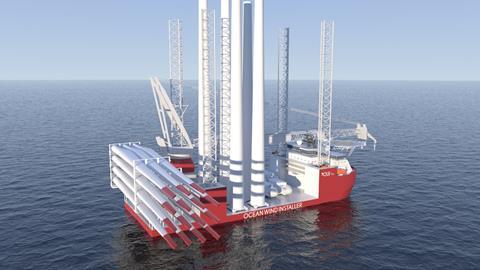 The vessel will be able to lift units weighing in excess of 1,000 tonnes to a height of 150 m.

“This ship is expected to be highly attractive for the construction of big international wind farms in the coming years,” said Erik Haakonsholm, general manager of Vard’s offshore and specialised vessels division.

Odd Strømsnes, ceo of Ocean Installer, added that the company is already prequalified for certain large offshore wind projects and is participating in tenders in the USA and Europe for both Norwegian and international energy companies.

“Such change of direction is very important for the traditional Norwegian oil and gas supply chain, which long term will have to replace its existing business with something else,” he said. “We currently have high expertise and solid revenues from oil and gas, and these resources are now dedicated to establish us as a leading player within the offshore wind space.”

To aid in this transition, Ocean Installer has made several key appointments including Even Larsen, former ceo of Fred Olsen Ocean, and Olav Hetland, former senior vice president for offshore wind power at Statkraft.