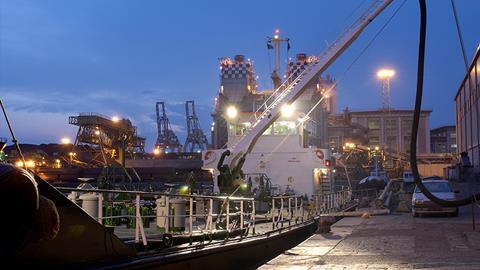 BIMCO, together with the other industry organisations, acquired data on all commercial fuel samples tested by Veritas Petroleum Services (VPS) during 2020. This VPS data clearly shows the geographical differences between the standard of the fuels delivered to ships. Europe and the US seem to have the poorest performance: both in relation to sulphur compliance which may lead to increased air pollution, and ISO 8217 quality parameters that may impact the safety of ships. The data has been handed to the IMO.

Amsterdam, Rotterdam and Antwerp, as well as the US East Coast, were identified as problem areas by BIMCO.

ISO 8217 fuel quality problems are significantly higher in Europe and the USA, which may potentially lead to engine problems for a ship. BIMCO said that in Europe particularly, viscosity (Visc@50) and pour point (PP) temperature were problematic for VLSFO. In the USA, it was the parameters of cat fines (Al+Si), total sediment potential (TSP) and calculated carbon aromaticity index (CCAI) that were found as being off-specifications (off-spec).

Off-spec means that the fuel does not meet one or more of the 14 quality parameters specified in the international standard for marine fuels (ISO 8217). Fuels that do not meet the specifications of ISO 8217 risk jeopardising the safety of ships as there is a risk, it could lead to unacceptable loss of power and propulsion.

Fuel with off-spec viscosity reduces the ability of the ship’s separators to remove water and solids from the fuel during onboard treatment prior to being used in the engines. Fuel with off-spec pour point temperature risks being unpumpable and may even solidify in the ship’s tanks.

Cat fines are microscopic particles consisting of aluminium and silicon (Al+Si) that originate from the refining process. Excessive levels of cat fines pose a risk to ships as they can cause accelerated wear of engines. A fuel with off-spec TSP value indicates that an unacceptable amount of sediment is likely to form in the ship’s fuel tanks and the fuel may even be unstable.

An off-spec CCAI indicates poor ignition quality of the fuel, which may lead to engine damage in severe cases.

In Europe 22 percent of high sulphur fuel oil (HSFO) was off-spec on one or more ISO 8217 fuel quality parameters, whereas in Singapore, Eastern Asia and Middle East the off-spec rates for HSFO was between 3-6 percent.

In Europe 5 percent of VLSFO was off-spec, whereas in Singapore, Eastern Asia and Middle East the off-spec rates for VLSFO was only between 2-3 percent.