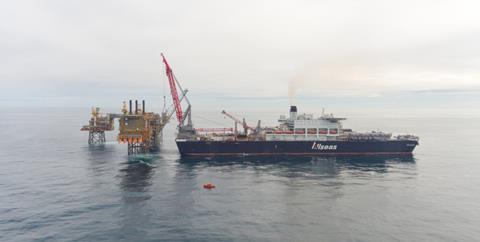 The 27 m-long, 18 m-tall topside module was loaded onboard directly from the Worley Rosenberg fabrication facility in Stavanger, Norway. It was transported to the field and installed on the southwest corner of the Buzzard production platform for hook up and commissioning.

The upper and lower sections were crane-lifted onto the quayside; after dismantling, Allseas said that 100 percent of the material will be recycled primarily into steel.

Among them were manifolds weighing 500 tonnes, which registered 720 tonnes on the crane load cell just before landing on the seabed at a 400 m water depth.