The costs of decarbonisation

Shipping industry analyst Drewry has published its first industry-wide costings to transition European cargo shipments to greener fuels, with the extra bills running to as much as USD14.5 billion.

Drewry believes that many of the world’s largest importers and exporters are insufficiently informed about the full implications of the forthcoming greenhouse gas (GHG) emissions regulations and the billions of dollars that will be added to freight costs in the future.

Pressure to decarbonise and reduce emissions of greenhouse gases is growing in all sectors. In shipping, the International Maritime Organisation’s (IMO) target to reduce GHG emissions by 50 percent by 2050 (from a 2008 baseline) will be complemented by regional and national regulations.

Besides regulatory changes resulting from decarbonisation policies, emissions limits and related taxes, there will be technological change in the design of ships and propulsion systems, with a transition to engines powered by low or zero-carbon fuels.

“Overall, the transition towards low or even zero carbon shipping will result in higher costs and we believe that we have put together the first independent cost model to help shippers forecast and quantify additional medium-term direct costs, where they apply,” said Philip Damas, managing director of Drewry.

The European Union will be the first region to enforce carbon taxes in shipping via its emission trading system (EU ETS), which will penalise users of high-carbon fuels such as conventional fossil fuels and apply not only to shipments within Europe, but also to all shipments to and from Europe.

As shipowners aim to comply with tighter environmental rules, several candidate green fuels are being considered, and they will have different implications and costs for shipping lines and for shippers.

Drewry has consulted ocean carriers and representatives of shippers and industry associations. This has enabled Drewry to design a new Carbon Tax and New Fuel Forecasts tool, which provides forecasts based on the ’most likely’ regulations, using three scenarios of future carbon taxes, and using three ’most likely’ new green fuel types (LNG, green methanol and green ammonia).

Drewry’s first industry-wide costing of both the European carbon taxes and for transitioning all European container shipments to a greener fuel type was issued on November 10. The cost for 2024 ranges between USD3.5-14.5 billion depending on the extent to which the industry switches to LNG and other greener ships instead of keeping to conventional fuel oil. 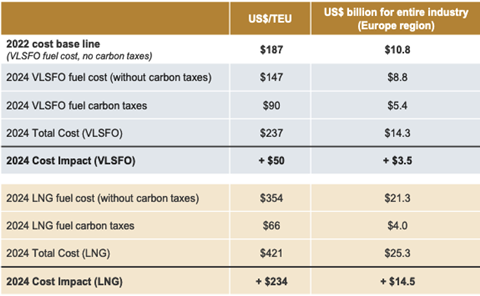 Drewry said LNG is the main ‘intermediate’ fuel type on the journey to decarbonise container shipping. Technology and fuel supply infrastructure are currently not ready for either green methanol or green ammonia.

The European Commission and Parliament have considered introducing new carbon taxes as early as next year, but it is now expected the new taxes will not come into effect until 2024.

In July, Maersk said it was planning to introduce surcharges of EUR170 (USD174.9) per 40 ft container for its Asia to North Europe services and EUR185 (USD190.2) per 40 ft for North Europe to USA services, thereby passing-on the extra regulatory costs.

In early November MSC said that it was planning to introduce surcharges of about EUR138 (USD141.9) per 40 ft container for its Asia to North Europe services. Other major carriers, however, have yet to clarify their intentions following the regulatory changes, said Drewry. The analyst urged ocean carriers to be as transparent with shippers as possible about the costs associated with sustainability, while retaining confidentiality over any sensitive, technology-related data.

“As the focus shifts away from inflated freight rates, we are seeing many shippers wanting to implement sustainability policies and measures within their procurement processes. The lack of consistency and visibility regarding carbon neutral shipping and associated costs is something on which all stakeholders; from shippers, ocean carriers, forwarders, regulatory bodies and consultants, need to find common ground. Drewry is committed to this discussion and helping our clients implement sustainable ocean freight practices,” said Chantal McRoberts, head of advisory Drewry Supply Chain Advisors.