Royal Boskalis Westminster has been awarded two transport and installation contracts for projects in Scotland and Turkey. 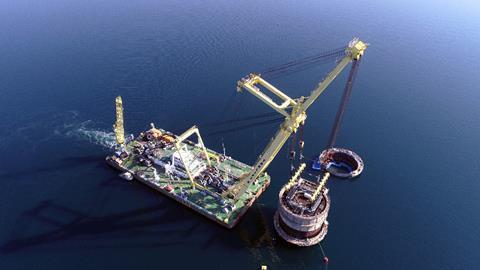 Cobra Wind International contracted Boskalis to install five floating 9.5 MW wind turbines for the Kincardine wind farm, located 15 km off the coast of Aberdeen in Scotland. Operations are due to begin September 2020 and will be Boskalis’ first floating wind farm project.

The heavy anchor handling tug (AHT) BOKA Falcon will install the anchors and chains on the seabed. Meanwhile, Boskalis will deploy its semi-submersible barge Fjord to transport the floating foundations from Ferrol in Spain to Rotterdam, the Netherlands.

In Rotterdam, the turbines will be mounted on the foundations, before being towed to the wind farm site.

In a separate project, the DLSY consortium – consisting of Turkish companies Limak and Yapi Markezi, and South Korean companies Daelim and SK Group – contracted Boskalis to install bridge sections for the Canakkale 1915 bridge in Turkey.

Boskalis will deploy the floating sheer leg crane Asian Hercules III to lift and install 20 sections for the 4.6 km-long bridge. A Boskalis AHT will provide assistance during the operations, which will take place in 2021.