The US federal government has given the green light for Vineyard Wind – the country’s first commercial scale offshore wind farm. 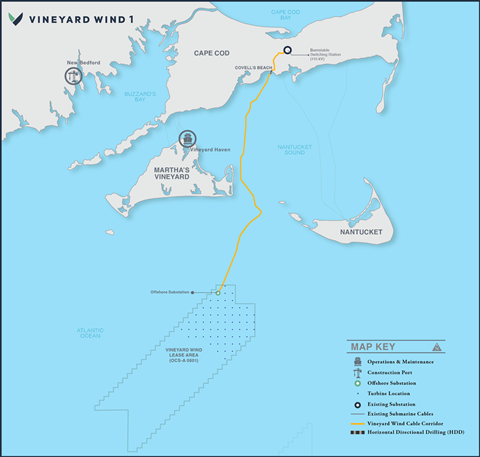 Vineyard Wind – the joint venture between Avangrid Renewables and Copenhagen Infrastructure Partners (CIP) – received a record of decision (ROD) from the US Department of the Interior Bureau of Ocean Energy Management (BOEM). The 82 MW project will be built off the Massachusetts coast and will feature 13 MW GE Haliade-X turbines.

“With this record of decision on Vineyard Wind on the books, the era of American offshore wind is no longer on the horizon – it’s here, now, off the coast of Massachusetts, and the answer to America’s energy future is blowing in the offshore wind,” said US senator Edward Markey. “Vineyard Wind will be the first of many offshore wind projects to come, and we can use our Bay State know-how to show the rest of the country how to get steel in the water, zero-emission energy on the grid, and union jobs to American workers.”

“Today’s ROD is not about the start of a single project, but the launch of a new industry,” added Vineyard Wind ceo Lars T. Pedersen. “It’s been a long road to get to this point, but ultimately, we are reaching the end of this process with the strongest possible project.”

Financial close on the project is expected in the middle of this year.