Vattenfall and Mammoet to develop climbing crane for onshore projects

Swedish power generator Vattenfall is working with transport engineering specialist Mammoet to advance the use of the latter’s climbing crane for onshore wind energy installation works. 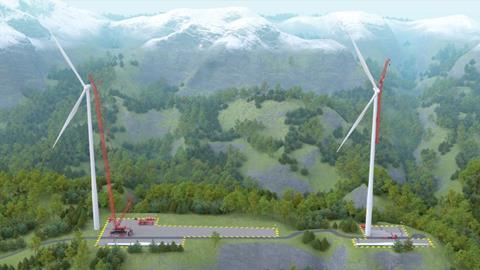 The climbing crane concept uses the turbine tower instead of the ground for support as it adds more sections in stages, with no limit on how high it can go. A Vattenfall team from its onshore wind business unit is working with Mammoet and hopes that the technology will be seen on sites within the next few years.

Programme manager Jelmer Boukes and his team at Vattenfall said the crane would represent one of the biggest step-changes seen in wind farm construction for years, offering multiple benefits in terms of CO2 reduction, minimised impact on local communities and cost benefits.

There would also be direct benefits in the operation of the crane itself. Due to its much smaller engine and capacity requirement, the crane could be powered by electricity instead of fossil fuels, Vattenfall added.

Eva Julius-Philipp, Vattenfall’s head of environment and sustainability wind, added: “In total it is estimated that the new crane could significantly reduce transport and installation emissions during wind farm construction compared to standard methods. It will help us take another important step towards Vattenfall’s goal of net zero emissions by 2040 for our operations.”

The WTA assembles wind turbine generators by attaching directly to the tower itself, using a series of clamps to self-assemble and then climb to each lift location. It assembles tower sections, hubs and nacelles.