The joint venture Vietsovpetro recently engaged Sarens for a two-part project involving the load out of two jackets in Vung Tau, Vietnam 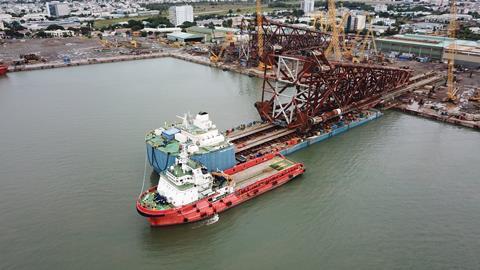 For this operation, Sarens mobilised the following equipment:

The equipment was selected based on a variety of factors, including jacket dimensions and weight, tidal conditions, transport barge configuration, strandjack load, mooring and ballasting calculations, and more.

The intention had been to use two 800-tonne breakout jacks to surpass static force and move the jacket from its initial position, then deploying the four 588-tonne strandjacks to pull it into its final position on the barge. However, Sarens did not need to use the breakout jacks as the strandjacks alone were sufficient to overcome any challenges.

Sarens successfully moved the 4.844-tonne heavy, 140,3-metre long ZWP12 jacket. Sarens crew used the strandjacks to pull the jacket along 148 metres of skidways, including 21 metres on the ground and 127 metres on the barge. It came to rest in its final position on the barge.

The loadout was scheduled for the next morning, but due to the approaching Typhoon Noru had to be deferred two days. Despite the delay, the crew still had to contend with heavy rain and winds reaching up to 24 knots. They used submersible pumps and deck pumps, in combination with the barge’s internal ballasting system, to balance and level the barge at the quayside. Because of the port’s shallow sea floor, they also had to be careful to maintain the barge’s draft during the loadout operation.

“The loadout was performed seamlessly, even with inclement weather from Typhoon Noru,” says project manager Robert Suh. “The team performed under the estimated time planned, leaving our client Vietsovpetro happy with our execution of work.” Simlarly, the ZWP 15 jacket was loaded out last month.

Sarens would like to congratulate the 40-member team, from engineering to on-site execution, for a successful operation.