Germany’s Greiner has had a busy year, marked by numerous innovations for a number of customers in the heavy lift and specialised transport sector.

One such solution – a wind tower transport system – was delivered to Ville Silvasti and consists of a Nooteboom four-axle Jeepdolly at the front and a Scheuerle K25L platform trailer at the rear. 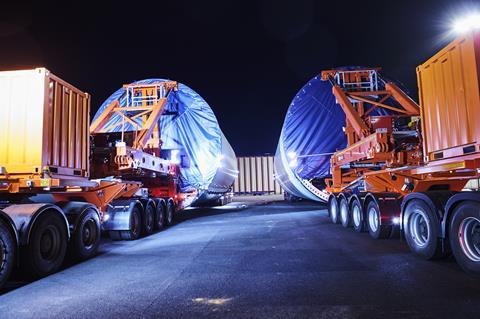 Designed for towers with an inner diameter up to 6.5 m and a maximum weight of 140 tonnes, the solution has already been put to work by Silvasti in northern Sweden. Mammoet has also ordered four units, of which one has already been delivered, said Greiner.

With a multifunctional adapter plate, existing turntables can also be used, said the manufacturer. Depending on the weight of the towers or the required numbers of axles, the spinning radius of the adapter can be quickly adjusted in a simple manner with socket pins. With a fewer axles, protruding parts of the adapter can be removed; this also reduces the weight. 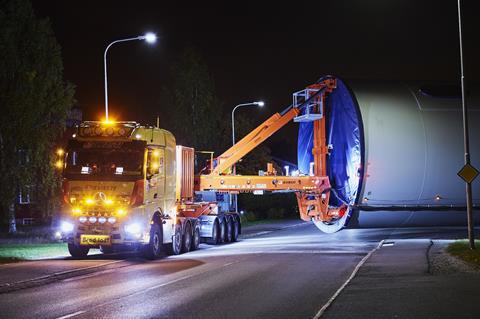 The optional front turntable is equipped with a hydraulically switchable swaying hydraulics and the system can be “pre-tensioned” with the Greiner hydraulic-prestressing-system (HPS) for lateral stabilisation or to prevent the load from swinging up.

Two main girders instead of one also stabilise the system.

Another milestone for Greiner was the delivery of a lifting unit for loads up to 4,000 tonnes for Riga-Mainz. The solution was to be deployed to lift and move complete bridge structures. 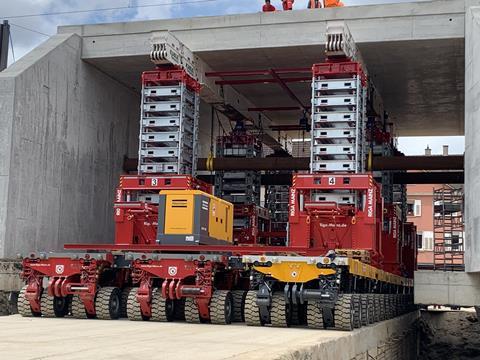 Greiner developed the Hydraulischer-Kletter-Turm (HKT) 500, which was renamed by Riga-Mainz as a power lift tower. After a challenging development and fabrication phase, the system was put through its paces at the beginning of May 2021.

Riga-Mainz received six units of 500 tonnes each to create a total capacity of 3,000 tonnes of hydraulic lifting and climbing towers. Each unit consists of a base unit with lifting cylinders, a lifting frame for lifting the stacking elements, and a trolley with detachable extension including hydraulic retraction device.